'Chucky's Gift to Me' 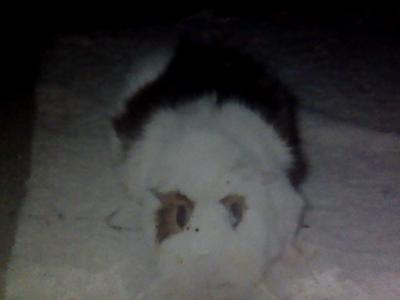 Mostly, I have been owned by dogs throughout my life. However, I do have another heart animal, another domesticated pet that has made my life whole throughout the course of my years. This animal is the guinea pig. The story I am about to tell you is about the first guinea pig who ever owned my heart. His name was Chucky and he became my best friend around 1999 or 2000. I was still in grade school the first time I set my eyes on him and even then, he stole my heart.

Chucky and I were best friends from that day on. We did everything together. Most children had dogs or cats. But me, I had a guinea pig. Yet, I didn't feel cheated. I felt like Chucky was just as good a friend to me as any dog would have been. When I was a child, the Saturday morning cartoons were still a tradition and they still lasted longer than just two or three hours. I watched them every Saturday and would sit on the couch with Chucky on my chest as I did so. It became a force of habit. I would watch all my favorite shows and he would lay comfortably on my chest, making those soft sounds he would often make, and nuzzling my chin in the way he always did.

Chucky passed away when I was in the seventh grade. I wasn't nearly as young as I had been when I first received him many years before, but it was my first real experience with death and grieving. Of course, we'd lost pets before Chucky, but I hadn't been close to any of them and so their deaths didn't hit me as hard as the death of Chucky did. Back then, I didn't quite understand the grieving process. I didn't understand why I was feeling all the different emotions I was feeling. I even recall waking up that morning, having my sister tell me "Chucky's dead," and having to walk up to the cage, open it, and touch him to make sure she was telling the truth. I was in complete denial. And that denial lasted a long time.

For months after his death, I felt like I wanted to cry. But I stayed in denial longer than I have for any pet since him. At times, I felt like I was losing it because no matter how hard I wanted to cry... I just wouldn't cry. It shocked my mom almost as much as it shocked me. I think she had begun to worry about me. She knew that Chucky had been my constant companion for four years and was afraid that I was trying to hold the pain of losing him in.

One day, however, I was sitting on the couch, watching the Saturday morning cartoons in the same fashion I always had when he was with me. I wasn't even thinking about him, wasn't even looking in the corner his cage had always sat in, my eyes were fixated on the screen, my mind concentrated on the scene that I was watching. And suddenly, I felt a soft amount of weight on my chest and a gentle nuzzle at my chin and for the first time since Chucky had passed, I cried. My beliefs about the after life are quite different than most people. I'm not spiritual by any means. But even I often find myself believing that it was Chucky, giving me my tears.