'I Dreamed of the Rainbow Bridge' 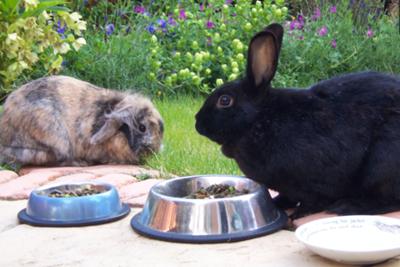 On Sunday I lost my Barley girl - a beautiful, glamorous lionhead lop-eared bun.

She was ill almost a year ago with e-cunniculi (head tilt) and it took months of syringe feeding and rehabilitation to teach her how to hop in a straight line again although her head tilt never completely straightened out. She was doing really well but then in Autumn her mate Juniper died very suddenly and of course this made her really sad (and me!)

After a while to make sure that there was no trace of infection left in the garage where they live I adopted two rescue guys hoping that I could get them to bond as a trio and keep Barley company with lots of warm snuggles. Unfortunately the bonding didn't go as well as I hoped and they kind of ignored her so she was still sad and became quite frail. Then last Sunday I went to give them all breakfast and found her dead on the floor.

I've been so busy with two new stressful jobs and I haven't been able to bury her yet - a problem which was not helped by the intense frosts this week which made the ground too solid to dig.

I think I must have been in denial a bit but last night I had the most vivid dream where she woke up from the box where she is waiting to be buried and was restored to her full health before she became ill. We went for a walk in a bright, sunny park and as we walked along the path we were joined by Juniper and my dog Amaya who is very much alive. There was such a reassuring atmosphere of love and hope and I woke up feeling so pleased that she was OK.

As I sit here trying to complete a lot of work for tomorrow I've just had my first proper cry so perhaps she was telling me that it's OK to let go?

I shall miss my wonky lop-sided little girl and I really hope that she has been reunited with her handsome Juniper at last.

Although it's horrid to read so many tales of sadness this site gives me hope that there are actually lots of splendid caring people out there.