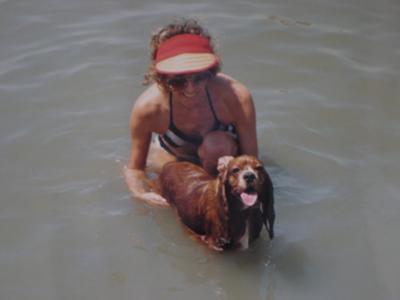 Sarah and I doing her favorite thing


One of my favorite writers, Sir Walter Scott said:

“I have sometimes thought of the final cause of dogs having such short lives,
And I am quite satisfied it is in compassion to the human race;
For if we suffer so much in losing a dog after ten or twelve years,
What would it be if they were to double that time”.

Sarah was a Christmas present from my Husband Paul in 1986, the year we got married. She was a Cocker Spaniel, with a silky red coat, long droopy ears, that she often stepped on, sad brown eyes and a white marking from the top of her head to the tip of her nose. She was perfect!!

I laugh now remembering how Paul explained to me what the rules were. “Dogs don’t belong on the bed, he said, we have to train her properly”, so we put up a gate to the master bathroom and put plenty of paper on the floor, we were going to show her who was in charge. Within one week she had trained us. She not only was on the bed, she was under the covers. And so life with Lady Sarah had begun. Let me say right here that I always either called her Lady or Sarah, unless she was in trouble and then I called her Lady Sarah. What is amazing is that she knew the difference.

She loved going for walks to the park and she loved being around the grandkids and they loved her too. She particularly liked being around the kids when cookies were handed out. She would bark at company when they came in and wouldn’t stop until they acknowledged her. She was very social.

The night of January 16, 1994 was a particularly hot night, even for California. In the weeks that had proceeded this night, Sarah had begun digging in the house. We would come from work and find the pillows that were on the couch and bed all over the floor. I thought it a bit strange, but, just figured she had acquired a new bad habit. I had a terrible time getting to sleep that night, besides being hot; Sarah had decided she wanted to sleep on my pillow right next to my head. I tried to push her away, but to no avail, finally I drifted off to sleep.

Then at 4:37am on the morning of January 17, 1994 the world started to shake and it seemed like it would never stop. The Northridge Earthquake was reported as a 6.5 magnitude. My husband told me later that Sarah was licking my face profusely while I was screaming and she never left my side. When the shaking did stop, we had lost almost everything we owned, but, we were lucky we got out with our lives. Later, when we were over the shock of what happened, we remembered about Sarah and her digging. My family and I are convinced that Sarah knew the quake was coming. The digging stopped!!

We finally found a new home that we fell in love with, it was on a huge lot that had a swimming pool and several fruit trees. We moved in April of 1994. Sarah loved the new home too. One of the first things I had to do was to show her where the steps were in the pool, just in case she would decide to take a midnight swim or fall in. Good thing we did!! One Winter night about 2am my Husband and I both bolted out of bed, there under the covers was a sopping wet dog. We surmised that she fell in the pool. Sarah looked at us as if to say, why are you guys looking at me like that. She definitely provided us with many great memories.

Around the middle of October of 1999, Sarah got very sick. Our Veterinarian, Dr Gilmore gave us some medication and special food for her, he said she had an enlarged liver. At first it seemed to make a difference, Sarah seemed to be getting better, even playing in the yard with the squirrels again. She was unable to jump up on the bed anymore, so, I laid a pillow on the floor next to my side of the bed, for her to sleep on. She would lay there and I would hang my hand over the side so she could feel me there.

One morning I got up for work, went to get my cup of tea and realized Sarah was not behind me. She always got up and walked to the kitchen with me. This time she lay there on the pillow, still sleeping. I put her dog treat on her pillow and hoped that when I got home that night she would be awake and happy to see me as always.

That night I went straight home after work. I opened the door and immediately knew something was very wrong. She had met me at the door for the last 13 years. I ran to my room and saw her, still on the pillow where I had left her. I knew that I would have to make some difficult decisions. I could not stand by while she suffered. I picked her up in her blanket looked at my Husband and without speaking a word; we got in the car and drove to our Veterinarians office.

When we got there Sarah was very quiet, she licked my hand, almost as if to say, its okay, you can let me go. My Husband and I stayed with her as she slipped away. I hugged Sarah and with tears in my eyes, I leaned over and whispered to her that I would see her again at the Rainbow Bridge.

After Sarah was gone, going home was the hardest part of the day for me. She would not be there to greet me like she used to. It’s amazing how much a part of our lives she had become. I was alone in the living room, watching TV one night and I heard a noise in the kitchen, it sounded like Sarah’s dog tags hitting her metal dish and for just a moment I forgot she was gone. I miss her companionship, her acceptance and the unconditional love only a pet can provide. In the time we had together, she made me want to be a better human and to do extraordinary things for animals.

So for now, I walk a little slower from the car to the house and there’s a hole in my heart where Sarah used to live.