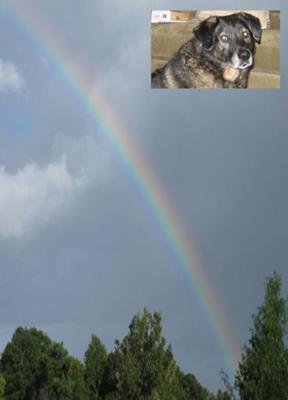 Lobo and his Rainbow

I adopted Lobo from Animal Control 10 years ago; one day before he was to be euthanized. He had a spirit like no other, my most loyal companion.

After a year long battle with cancer, he began to show signs he was starting to suffer and so I called our veternarian and made the appointment I had been dreading.

On our last evening together, I took Lobo outside in the backyard and we sat and looked at the lake. I told him when he made it to heaven safely the next day to send me a sign so I would know he was ok. I told him it could be a fish jumping that caught my eye, an unusual bird on the lake, just something. I would be on the lookout.

Lobo's life ended peacefully around 2:00pm the next afternoon. We had a small rain shower later that day and as the sun came out something drew me to look out my back doors over the lake. It was Lobo's sign; a spectacular rainbow! I was amazed! Of course I grabbed my camera and photographed it. Then I saw the reflection of it on the lake and the end of the rainbow stopped right at my backyard!

The next morning I went to pick up Lobo's ashes. They gave me his urn and an envelope that contained his cremation certificate. Behind that was a piece of paper with a rainbow on it and "The Rainbow Bridge" poem. I almost fell over! You see I wasn't familar with the poem.

I am attaching a picture of my wonderful dog Lobo and his actual rainbow. I am truly blessed; I know exactly where to find him.