'My Chicapee Is Waiting For Me' 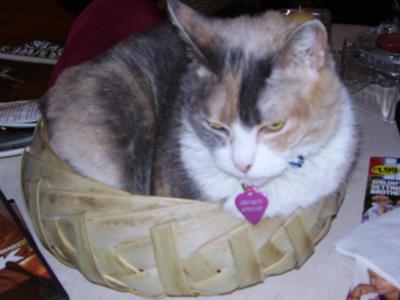 My cat Spice actually went by Chicapee a name my mother gave her that just stuck. She was my beautiful baby that we raised from a tiny kitten. I watched her open her eyes, learn to walk and eat for the first time, she would sleep in the crook of my neck for warmth and stick her nose in my face when she was hungry.

Like most Calico's she grew up and became one of those cats who wants love when she feels like giving it which usually happened when I was laying in bed and she felt I was in her spot which so happened to be the middle of the bed, (most cat owners know your cat doesn't conform to you, you conform to them) or when I was reading a book. She would claim the book as her resting spot.

When she was 9 I almost lost her to cancer but her vet saved her life, everything was fine for the next year but when she turned 11 I noticed she would start to gag every time she would use the litter she was checked and they found her some of her teeth had to be pulled which I told them to do but the problem would not go away. I would hear her start to gag no matter what time of day it was I would get up and sit with her till it stopped.

I took her to a specialist and found that the cancer had come back and spread. My heart broke because they gave me the options and none would help her live past a year. She wouldn't eat and I had made the appointment to put her to rest. I sat with her and told how much I loved her and that she would be alright and she looked at me then got up and ate her food like there was nothing wrong. The doctors gave her a month with medication, she lasted six. I know it was time she had gone from being my plump little baby to a shadow of herself.

They let us stay with her until we were ready to let go. We wrapped her in one of her blankets so that she would be able to smell us and home as she went, but I believe that even though she is gone in body she is not gone in spirit, she still visits me when I think of her and in those first few weeks after she was gone I know she was there cuddled up to me and late at night I could hear her purr for me.

It's been a little over a year since she has been gone and I have adopted two new little trouble makers who I think were given a few pointers from a certain guardian cat on how to drive me crazy but I would have it no other way. I will see her again, for now I am happy with her watching over us.