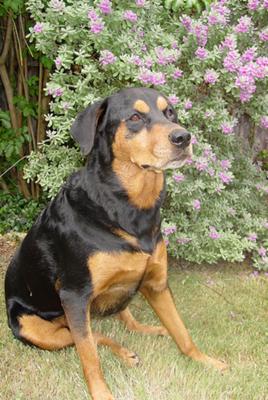 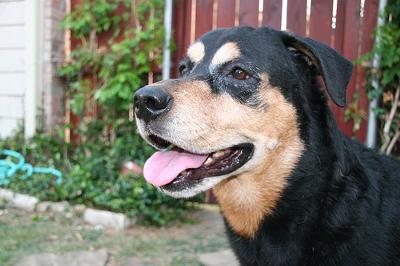 An older and wiser Jenny 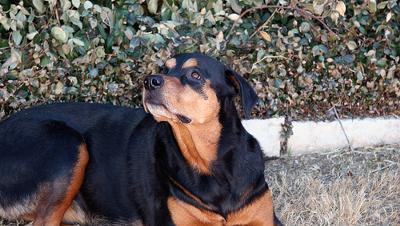 Jenny at the state park

Jenny was more than a pet, she was a loyal and loving companion and I truly miss her. Not a day goes by that I don't think about her.

A co-worker found her wandering down the middle of a street and brought her to work. My wife fell in love with her so we decided to keep her. She was a Rottweiler and probably Shepherd mix. Smart, loyal, affectionate, but fierce and protective when she needed to be.

I was really sick one time and she laid by my side for an entire week until I started feeling better. I took her to the park all the time, and when she got older I took her camping a few times too. What a great time we had. I have so many stories, but I think you get the picture.

Fast forward a short 9 years later (February 2010) and Jenny just wasn't getting up or eating. We were in the middle of building a new house on 10 acres and we were hoping she would make it until the house was built. She didn't and my wife and I were devastated.

My wife drove to the vet while I sat in the backseat with Jenny. It was the hardest decision we have ever made, but we didn't want Jenny to suffer so we had her put to sleep with us holding her. We cried for 2 days and were absolutely miserable. We have 4 other dogs, but none of them were as special as Jenny was.

We finally moved into our new house, but it felt empty without Jenny and I didn't feel her presence. I got this crazy idea that maybe she got left at the old house and didn't know how to get to the new house.

One afternoon after taking one of my other dogs for a walk in the park, I drove by the old house and parked across the street. The gate to the yard was open and I told Jenny if she was still there to come on and get in the car so I could take her to the new house. I sat there for 5 minutes then drove home.

On the way home I prayed to God for a sign so I knew she was in heaven or still with us. I walked all of the other dogs and then made myself dinner. No one else was home and I sat down at the kitchen table surrounded by four tired dogs sleeping at my feet. I had forgotten all about my prayer when I thought I heard the doggie door open in the utility room. I wasn't for sure so I stopped eating and listened very carefully. A few minutes later I definitely heard the doggie door again so I knew Jenny was back with us. I felt a huge wave of relief come over me and I no longer felt sad.

I read a lot of stories on this website that helped me get through my sadness. I hope sharing this story with you helps you in the same way. And one last thought... Do dogs go to heaven? You bet they do. I look forward to the day that I am reunited with my Jenny.