'Nicki Made It Back Home!' 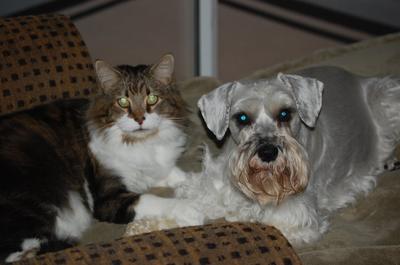 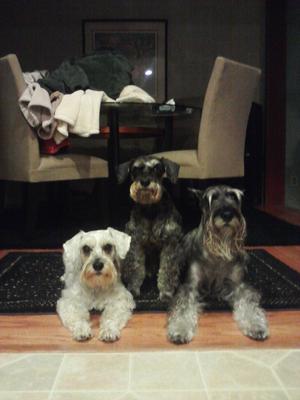 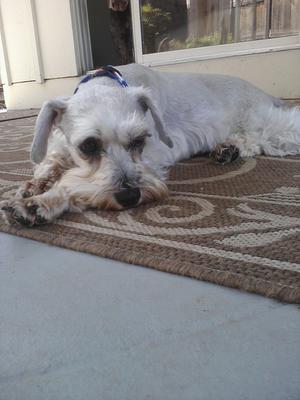 I lost my little Schnauzer Nicki to cancer in March of last year.

Something very unusual happened after Nicki's death. I was going to keep it to myself (to avoid sounding like a kook!!) but maybe if I share it will help others feel better. I feel that I experienced something that proves to me that our pets have souls and survive after their lives here. Of course I have no idea what exactly happens and have always been VERY skeptical of everything - religions, beliefs in life after death, spirits, etc.

While Nicki was suffering the final months of her life I used to look directly into her dark eyes and tell her that I knew she was sick and that if she had to leave me it was okay, and that she could "Come back home to Momma." At the end of March when she took her final breath her eyes remained open and her head was resting on my arm. I was left alone with her and tearfully looked into her beautiful eyes for the last time and told her that I would miss her so much and that I wished she could come back home.

The following morning after Nicki was gone a friend stopped by with a 3 year old boy she was watching for his mother. I had never seen the child before and he was asleep in the car when she arrived with him. My friend and I sat on my front porch and talked while he slept in the back seat of her car. When the little boy woke up he played on the lawn while we sat on the porch. My other two dogs were very excited to see the child and were making a big fuss at the door to come outside.

The little boy came on the porch and I opened the door to let the dogs out. They were overly exhuberant so I ushered them back into the house. The child looked concerned and looked around and asked "Where'd your 'nother dog go?" My friend and I looked at each other in surprise and she asked him "Did you see another dog?" to which he (still looking around) said that he did. We asked what the dog looked like and he said (while still looking around) "Mmm....white" Nicki was a very light silver which a child would consider white. The child was visibly concerned about the "nother dog" and carefully looked behind bushes, even looked in my garage, looking under the car and all around. I asked him if the dog was happy or sad. He replied "Happy!" Very strange.... .we went into the house a few minutes later. The little boy noticed a photo of Nicki and my other two dogs and exclaimed "THERE'S THAT DOG!" Like I said.... very strange.

Also, my cat who was best of buddies with Nicki, would, out of character, get off my bed in the middle of the night and appeared to be playing like he used to play with Nicki. He would run around the house and finally come back to bed.
Why am I sharing this bizarre experience? Because I used to think that death was the end of our pets, but this experience changed that. It was very comforting to see that animals have little spirits/souls. There is nothing going on any longer at the house, so it's as if Nicki has gone and moved on to wherever it is that they go. The comforting thing is - she had a spirit. If Nicki has a spirit then so do all of your dogs. If it wasn't for this little boy seeing her, I would not have known. Your pets may have come to say goodbye but you weren't aware.

This is absolutely a true story. The child had no idea who I was or what had happened to one of my dogs. The boy was genuinely concerned (furrowed brow with big blue eyes) about a white dog that he saw come outside that didn't go back in the house with the other two. He identified Nicki in the photo without being questioned. I really hope that this story helps comfort someone else. It really helped me to cope with the loss of Nicki. I have no idea where she is now but know that she survived death and is no longer suffering. And remember.. the child said that the white dog was "happy.".....