'Shadow, in The Dog Park In The Sky' 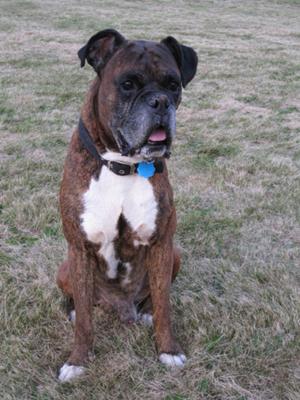 This might be a long story, but it is well worth reading to give you hope and comfort that your lossed pet has died and gone to Heaven.

My ten year old Boxer, Shadow, passed away one week ago. It was very un-expected. Shadow was very healthy and full of life. He was my best friend, and always made me happy. I believe God prepared Shadow in his last week here on earth.

The week started with Shadow spending time with my mom, brother, and other ten year old Boxer, Rocky. He got to play there at my moms house, and get full attention, and lots of treats and comfort with my mom. Then I went to pick Shadow up, and bring him to my girlfriend's and my house. Thanks to my girlfriend, I always took Shadow to a huge dog park here, where he was free to run around and wander, smelling all the trees and bushes. My girlfriend also has a 2 year old puppy that loves to go to the dog park daily.

So, this week Shadow had plenty of walks at the park, which was like Heaven to him. It was Thanksgiving this week, and Shadow got to see a lot of friends and family, and he got his fair share of turkey day food and treats. After Thanksgiving food and family, my girlfriend and I took Shadow to the dog park again to play and be free. As we were walking, my girlfriend saw how happy Shadow was and we commented to each other that Heaven to a dog must be like one big endless dog park in the sky, where a dog can run free with all of the other pets we have had that passed on. Also all of our deceased relatives are there to guide them.

So last Sunday came, and became the hardest day of my life. Shadow woke up like normal at 7 a.m. in the morning, and I woke up with him and let him outside to go potty. He came in, and I gave him his dog treats and his breakfast. Then he went in to say good morning to my girlfriend Kari and I. Kari and I always get him excited and all pumped up by saying " GOOOOOOOOD MORNINGGGGGGGGGG!!!!! Nice and long and loud, over and over, till his tail starts wagging, and he gives us all kisses. So Shadow was all happy and feeling our love. All was great. Shadow started walking around the house and was ready to take on the day.

Then he came into the room where Kari and I were, and he just fell down, and started having a heart attack. There wasn't much we could do for him, and we tried over and over, as I held him, trying to get him through it. It didn't take long, about 2 or 3 minutes, and my best friend in life passed on.

My dad passed away 5 years ago, of cancer, and I know my dad was there in Heaven to greet my little friend, and take Shadow to his new home, THE DOG PARK IN THE SKY. We cried and cried, and had a very empty feeling inside. This loss was not expected, and very hard to swallow.

I called my mother and my brother to tell them the shocking news. They were sad, and my brother came over to help carry my dog to the vet to have his remains prepared for us. The emergency vet clinic was very helpful to me, and comforted us. The woman helping us was in tears herself.

I just got Shadow's remains back 2 days ago, in a nice cherry wood box, with a nice big name plate SHADOW, and also a nice paw print in clay. The paw print was a very special touch, because every morning now, I get to look at his cherry wood box, with his big poster sized picture of him, and I get to touch his little toe prints in the clay. It is very special to start my day off with Shadow knowing I am always thinking of him.

Okay, that was the hard part. But here comes the great news. I always have believed in spirits always moving on and never dying. I believe the dead can always come back and give us signs that they are still with us, and that they are fine now in Heaven. I needed this, because I was crushed, and hurting so bad, knowing I would never see my dog again in this life.

So the night Shadow died, I kept asking Shadow out loud to show me a sign that he is okay, and still with me. Kari and I went to his favorite place in the whole world, the dog park. When we got there, I said "Shadow, let's go for a walk", he always got excited when I said those magic words to him.

I had my camera with me, and I kept talking to Shadow, and I told him to show me a sign. I was begging for a sign. We walked the same path that we always went on, passing all the trees and bushes that Shadow always smelled. I took over a hundred pictures, and I was lucky to catch 3 separate pictures of an "orb".

For those of you that don't know what an orb is, it is a bright ball of light, in which spirits can travel in. It was a clear cold night, and the pictures of the orbs appeared when I said special things to Shadow to try to make him appear. The orbs were located above the ground about the exact height that Shadow would stand. This was amazing to me, and brought me instant hope and comfort. I know in my heart that this was Shadow showing me that he is alright and still with me.

This wasn't enough though, Shadow wasn't done showing me signs yet. After the dog park, Kari and I went to help Kari's daughter with a driving lesson. She needed practice before her road test. So as we were driving, Laila decided to park the car behind a parked car. After parking the car, Laila said, "That's weird!!" I looked, and the name on the car was Shadow. It was a Dodge Shadow. I didn't even know that car existed. But to see the name of my dog on a car when I was looking for signs was unreal. Again I was pleased, and I could really feel my dog right next to me.

Still this wasn't it. Shadow had one more awesome trick up his little paws, lol. This was a good one. Laila, Kari, and I pulled the car into our driveway. As we pulled into the driveway, I said out loud, "SHADOW WE"RE HOME!!!!! SHADOW, WE'RE HOME!!!!!!! Two seconds after saying that, our Christmas lights on the entire house turned off, just like that. WOW!!!! it was unreal, and we all smiled. Then Kari said, "Good boy Shadow, Good Boy!!!" Then she said, "Shadow, now you have to turn the lights back on." And two seconds later, the lights just turned back on, and stayed on the rest of the night. These lights never went off before and never did again. They were on a timer, and stay on all night, until the sun comes up. We all got the chills, and felt Shadow right there with us. All of my pain and heartbreak went away. All we felt was happiness to know Shadow is fine and has truly crossed THE RAINBOW BRIDGE.

I hope my story helps anyone out there that has lost a pet. I now have proof that all Dogs go to Heaven. I know I will see my Shadow again someday. And I know he is with me everyday. It is truly amazing, and I hope you believe my story. It is all true, and I feel much better.

God bless you Shadow, and all other pets that have moved on. I love you.