'The Ringing of Georgey's Bell' 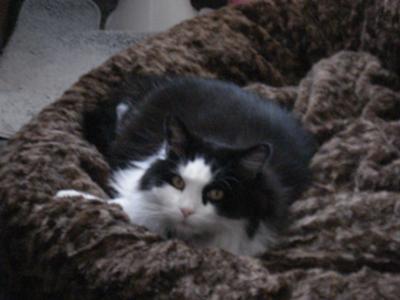 I had my Georgey "Dordy" since he was an 8 week old kitten, this beautiful half persian, semi long haired black and white kitten with huge paws! My Georgey always wore a collar with a bell on, mainly because it would warn birds he was around and also if I called him in but couldn't see him outside, I could hear him. Sadly on 4 June 2011 my Georgey passed away unexpectedly and suddenly from Feline Pancreatitis aged 11 and a half. He had shown virtually no symptoms, he had lost a little weight and slept a lot but I put that down to his increasing mature age.

A few days after his passing, I had to go to the post office to collect a parcel as I missed delivery from my post man. I walked into the post office and headed for the counter for collection of parcels. I noticed other people at the cashier counters buying stamps and sending letters when suddenly I was stopped in my tracks by a loud jingly bell, just like Georgey's collar bell. It was loud, I looked at everyone around me, nobody seemed to take any notice, the bell seemed to come from an elderly lady at counter number 7, she had her bag in the crook of her arm, all I could make out is that maybe she had a bell on a keyring or on her bag. But this was bell was loud and her handbag was still and she was stood still. She wasn't even moving.

I felt very strange, I just knew it was Georgey letting me know that he was okay. I watched as the elderly lady left counter number 7 and headed for the door, she paused for a while before she left through the exit. And I stood there and thought it had to be Georgey, in all of my 41 years, I have never been in a shop or out and about and heard of anyone having a bell on their person or belongings, well I had never heard one.

Still in shock, I headed for the bank, and thought funny, Georgey has been gone a few days, and I was still awaiting a white feather from him (many of you will know the stories of receiving a white feather, after the passing away of somebody close). Just before I reached the bank, I noticed something out of the corner of my eye and about 6 feet away from me. It was a white feather, I couldn't believe it, within 2 minutes of the incident at the post office, there was the white feather. I knew it was Georgey somehow telling me he was okay and that he was with me in spirit.

Since then I have looked out and about for white feathers, yet there seems to be none anywhere, so it just proved to me that white feathers are not the sort of thing you find around every corner. I knew therefore it was my Georgey. Bless him. R.I.P Georgey "Dordy", until we meet again at Rainbow Bridge.