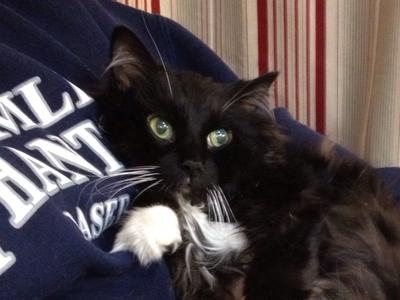 Vinny and I had been together since he was 6 weeks old. He was my buddy, my best friend, I got him when I first moved out on my own. He has only been gone a week when I write this. He had liver failure and lymphoma, an inoperable tumor. I held him when he passed, and I have been inconsolable since.

The next day was Easter, and it was mid morning when a cat resembling Vinny, black with white paws, showed up at my back door and peered in, completely unphased by my two remaining cats on the other side of the glass. I strongly felt that this cat was sent by Vinny to let me know he is OK and pain and illness free on the other side, waiting for me with my other passed cat, Annie, at the Rainbow Bridge. This black and white kitty still visits every day.