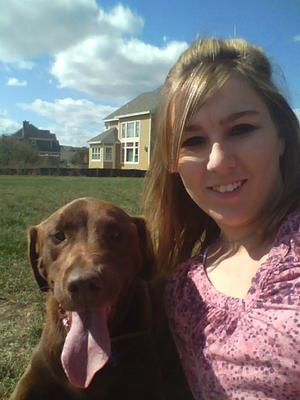 It was just two days ago I found out Zeus's seizures were back, they had been under control the past 2-3 years and was doing very well. He became very sick very fast in not even making it 2 hours with out having another seizure. Knowing we could not cure the seizures I was very disappointed in the vet for saying they couldn't see him getting better and that we should pay to have an MRI done to see which part of his brain was misfiring even though they said this would change nothing.

I had began researching online and was really hoping they would give a different medication a try since his prescription was no longer strong enough and hoping maybe he could try something else to get him back on his feet again, but they did not agree.

So December 7th my dad called me and told him there was no other option than too let him go. I cannot believe he is only 6 and there was nothing else that we could do. He was only a baby yet in my eyes and we could have fought harder for him.

So here I am 24 hours later and I do not think that it has quite sunken in yet that he's gone. Seeing his picture instantly makes me break down and my heart is broken so close to Christmas knowing when I return home he will not be there to greet me.

Putting a dog down is a terrible decision you have to make, if he had to go why couldn't it just be peacefully in his sleep? Knowing it is you making the decision to end your dogs life is the most heart wrenching feeling and it makes me sick to my stomach. This was the second dog I had to put down, and this time I never got to say goodbye besides on speaker phone to him and I will never feel his fur, or see his smiling face again. He was a great dog and truly a best friend and companion. I know it will be worse before it's better, but I just don't feel like this hurt will heal anytime soon.

Join in and write your own page! It's easy to do. How? Simply click here to return to Your Pet Loss Diaries - 'Brooke, Black Jack & Zeus'.