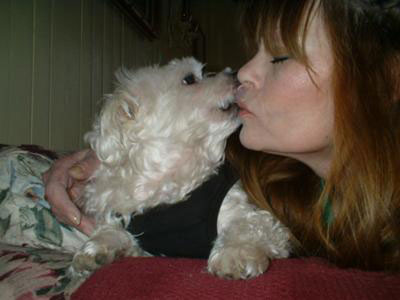 It was now Sept 13, 2011... a Tuesday. I called the vet... and he changed his mind about trying to find a mass. He said if I took you to another hospital... I could have an answer within 24 hours... as to what was going on. He had asked if I wanted him to call to get us in. I said yes... and within a couple of hours we were on our way.

It was a hot day... you and I never liked the heat. We got there and they took you from me. In a little while they called us in. The vet said she put you in an oxygen cage. She asked if I would treat you for cancer. I told her I did not want to put you through that. They had said that it could have been a pulmonary embolism... or cushings... or congestive heart failure. I asked if they could test for those. She said that she did not believe it was any of those things.

I asked her if you were her dog... would she treat for cancer and she said ... NO... she would not. She had said her father and other family members were doctors. That after hearing stories of human suffering... she decided on veterinary medicine... because they could relieve the suffering. She told me that the test would be about 2 thousand dollars... but she considered it useless... that the kindest thing I could do... was to let you go.

She said she could do it right then. I could not ride home... with my best friend... dead in my lap. How could I do that, Ollie. She called the vet who had just seen you... and the appointment was made to bring you in at 6:30... tonight. Daddy said... we didn't have to do it... we could wait... but Ollie... we were both suffering... I couldn't watch you dying slowly in front of me anymore. I couldn't put you through anymore. I told myself... if we went home... and you didn't eat or drink ... or pay attention to Derek... who you loved... I would let you go.

We spent the next few hours together... you took a tiny bit of water on your own... but wouldn't eat. You hadn't even tried to pull out that I.V. in your paw. You did not even look at Derek anymore. I was so numb Ollie. It was time to go. We went to the vet. In the parking lot... you barked at some passerbys... which you had not done in a while. We went inside. They took us in... and the vet gave you a sedative. You jumped up kissing me... and I said out loud... MY LAST KISS.

I was hoping that the vet would change his mind... do anything to help you. You started to slowly lose your footing... and I took you and put you in my lap... and held you. He came back and started the drug that would stop your beautiful little heart. I wanted to scream... NO! But I just held you tight... my sweet baby. And you died in my arms......

Join in and write your own page! It's easy to do. How? Simply click here to return to Your Pet Loss Diaries - 'Dayle & Oliver'.