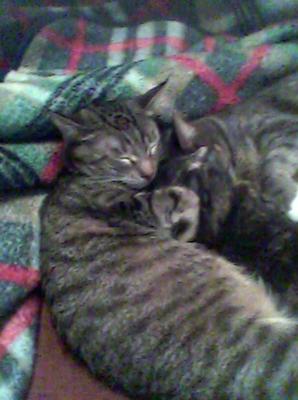 We had moved in our own apartment in November 2010 & I didn't want to take them (Sammy & Pooh Butt) because of how fast & how much I fell in love with them, I knew losing them would be devastating. Plus I reasoned: they live a block away & I can see them whenever I want.

My final attempt to resist taking them was: I told my ex I am going to tell what is going to happen after we take them home ~ 1. you will end up going back to jail (he went back to jail in Aug 2011) 2. I will be left to raise them alone 3. I will end up losing the apartment (I lost the apartment in march 2012) & 4. Something will happen to 1 of them & I will have to face it alone...

What I hadn't considered was how much I would miss them after we moved, even though they were a block away. I ended up spending more time with them at their house than I did at my own apartment. So, within a week or so, I couldn't take it anymore & we took them home ~ the happiest day of my life.

When we first moved in, we had no furniture & when we got home & put them down, they looked so small. It was funny watching them run & play & just be adorable. We slept on the floor, so we were on the same level as them & interacted more. They slept with us from day 1. We were already on the floor, so I played with them more.

And then one night around 4 in the morning, I hear this kitten cry. I looked down at mine sound asleep next to me, so I knew it was 1 of them. My ex opens the door to investigate & in runs this kitten. Apparently, his owners (like 4 or 5 buildings down) had abandoned him because he scratched 1 of their kids. The kids in our apartment building found him & since they knew we already had 2 kittens, they decided to set him at our door. My ex found his owners & went to return him (thinking they surely must be frantically looking for him) not knowing they didn't want him. After my ex returned with him & I heard they kicked him out on the street. On that day he became my Rocco.

So, within 2 months or less I went from never wanting ANY cats to having 3!!