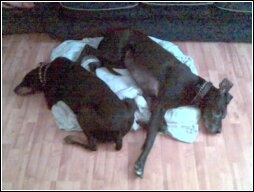 It's has been about a year and a half since I lost my girl Lilly. Growing up I had no pets unless you include snails lol. My Mom did not share my passion for pets and did not want the responsibility of having them. Lilly and Moxy were my "first real pets", so losing Lilly on December 5 2007 was my first experience dealing with the loss of a pet.

I worked at a local vet clinic and had brought Lilly in because she was having trouble walking, I was not too worried because she was getting on in years and had always been healthy. I thought it was most likely arthritis, and she would get some meds to help with mobility - I was terribly wrong. The vet took x-rays, and noticed some black spots on her spine, he told me it was spinal cancer! I felt like I would faint, I felt sick like my whole world crashed around me. All I could think was "why her?"

Lilly was recued from a mill somewhere outside Ontario, where she was used as a breeding bitch. She was brought to Ontario by some well meaning SPCA workers who wanted to adopt her, which they did only to find out they were not prepared to deal with an untrained 100 pound Great Dane. They surrendered her to Danes in Distress, she went to a foster home and this is when Lilly became a part of my life.

She was 3 (give or take a year) and had been neglected, abused and misunderstood. She was quite a handful in those days, she did not like men at all, it was worse if they wore hats and sunglasses, she would lunge at them and try to bite. Moxy my Dobe did not enjoy sharing my attention or my bed so there were many dog fights in my house back then, nothing too serious just the girls sorting out places in the pack.

After months of training Lilly started to find her place in my pack. Moxy was the boss and made sure Lilly understood. Lilly loved Mox from the beginning, Mox on the other hand took her time to accept Lilly, at times I thought I would lose my mind, I mean what on earth was I thinking? Single Mother with 2 large unruly dogs I thought I must be crazy and you know what? Maybe I was but I was crazy in love with my girls as I called them.

When I look back at those days I think of all the fun we had, and how Lucky I was to be owned by such loyal beautiful dogs. Watching big Lil blossom from an unruly crazy dog to being the sweetest most gentle dog I have ever known. To see her run at full speed over a hill or through the woods was somthing that I will always remember, it was a beautiful sight. As I think of those times now I feel that I was blessed to have her, she taught me so much and I feel blessed to know that she loved me as much as I loved her.

I honestly believe that nothing is more special then having the love of an old dog. It is different then puppy love, it's a love that is earned. To me it means that you have been a true friend to your dog and each year that bond becomes stronger and stronger until it's so strong that even in death it cannot be broken.

I think about Lilly every single day at many different times, about how she outlived the vet's prediction by 2 years, I believe she held on because of the bond we had - she was not leaving me until the very end, until she could no longer stay in this world and she did great right up till the end. I worried that I would not know when it was time, I worried I might do "it" too soon or not soon enough. In the end I did know the right time, she told me.

One morning she couldn't walk and I knew Today is that day. My best friend took me to the clinic and I stayed with her until the end. It was 1 of the hardest things I have done in my life and the most unselfish. She went on to the Bridge in my arms and my heart lost it's first piece. My kids, my Husband and Mox all felt the emptiness, the youngest ones were 5 at the time and had known her their whole life. She had been a a big part of our lives for many years, lived a long life for a Dane (12 years). She protected my house, and my family, had been a friend and playmate to my kids. Lilly was my dog and my friend and I miss her everyday. She also left big paws to fill.

Join in and write your own page! It's easy to do. How? Simply click here to return to Your Pet Loss Diaries - 'Joann, Moxy & Lilly'.