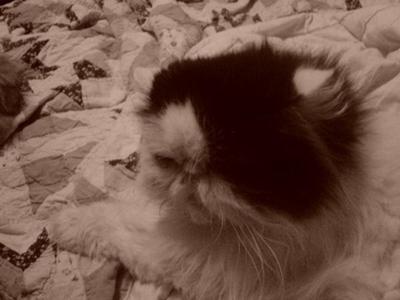 I lost Tofy (Toby) on Thursday Oct 20, 2011. I knew he was going downhill fast. I lost my job some time ago and was unable to get him better care. I feel so guilty. I told him the night before he died that I loved him and that I would see him again. I told him I would be ok. I told him it was ok to go and held his little face in my hands. He looked so tired and worn.

I told him I was going to sleep at about 6 that morning, and that I loved him again. I kissed him and sat and talked to him. Petted and combed him. When I woke up about 9 that morning, he was already going. I told him it was ok. He died about 11 am that day.

Tinky died 4 days later of some unexplained thing. They had both gone downhill in just a matter of weeks, dropping weight and losing balance. Tinky I tried to get to stay with me, but he was so weak. His little lamb ears were still perfect tho. He laid down with me on Sunday night the 24th. I told him to stay and I'd find a way to get him help the next day. I knew he was getting weaker by the hour and finally told him that if Tofy needed him, it was ok to go.

I told him I loved him and that I'd see him again someday too. I went to sleep early am with him by my side. I woke up at around 9 am and he was in the bathroom floor. I put him back on the bed with me and petted him, told him it was ok and not to be scared. He took his last breath around 11 am that morning. Oddly, they both died in similar fashions very close to the same time of morning, just days apart.

I am so lonely and afraid. I miss them both so much! I want them back. I hate the thought they are lying in the cold ground outside when they never set a paw outdoors in their lives. I did dig next to Toby and buried Tinky touching Tofy. I know they are together in Heaven now, waiting for me. Losing one was hard, but losing 2 in 4 days is devastating!

Join in and write your own page! It's easy to do. How? Simply click here to return to Your Pet Loss Diaries - 'Laura & Toby'.