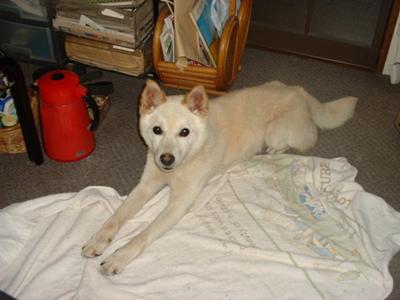 I really had no clue of how to take care of a dog. All I knew is that they needed food and water and to go for walks. “Well, first thing’s first”, I thought, “This poor thing needs to be hydrated.” Indeed that was a priority; it was a mid-summer, sweltering day in Tokyo. I took a bowl from my cupboard, poured some cool tap water into and laid it on the floor. The dog immediately put his face down and started lapping it up, emptying the bowl in under a minute.

“Should I give him some more?” I didn’t want the dog to overdo it. I remembered reading stories of people who were close to starvation or dehydration and dying as a result of suddenly drinking or eating too much.

“You better not Mark”, Naoko wisely advised, so I held back.

Next was to give him some food. I opened up the cupboard door, “Let’s see…potato chips, cookies, cereal… Nothing… Then I eyed a small tin of tuna in the back. “How about tuna?”
“It isn’t a cat Mark”, she responded giggling.
“Well, that’s all we have at the moment, and I have no idea where we can buy pet food on a Sunday anywhere around here.”
Naoko capitulated, “OK, let’s see then.”
I opened up the can, scooped the tuna fish onto plate with a fork and laid it down in front of the dog.
“Here you go.” The dog cautiously approached the plate, smelled it, looked up at me as if to ask me “Is this really mine?”, and started devouring it.
“Bingo! Now we’re rocking.”, I thought to myself.

Naoko knelt down beside the dog and innocently asked, “So what should we call him?”
“Call him?” My voice rose with both agitation and disbelief. “Nothing. He’s here ‘temporarily’…He has an owner somewhere and we’re gonna help reunite them. Giving him a name will only make it harder for you (as in Naoko) to say good bye when that eventuality occurs.”

I was serious. As cute as this dog was, I couldn’t fathom the possibility of having a dog enter my (our) life. The idea of having to divert my ‘valuable’ time and resources made me panic at the mere thought.

“First thing tomorrow, let’s phone the local shelter and see if they’ve got any info on this dog. The sooner this is all taken care, the sooner we can get back to our usual routine.”

Join in and write your own page! It's easy to do. How? Simply click here to return to Your Pet Loss Diaries - 'Mark & Bicky'.