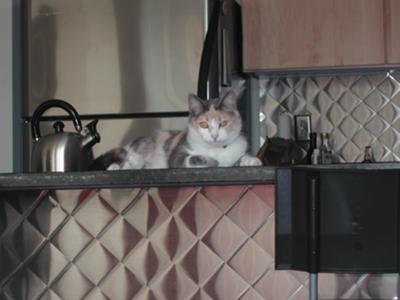 Naya in My Pittsburgh Apartment

I was feeling better coming into this week. I was hopeful for the election, I hadn't been let go from my job... yet... and thought I was getting over to the other side of my grief. So, it suprised me when I started going through all the same emotions I did when Naya first died. And I think I know why.

It started when the woman from the Pet Mortuary called and told me Naya's ashes were ready and she'd be bringing them in a few days. Here's the thing I forgot about grief - there is the initial sadness of losing a loved one but (and some animals), there's also the funeral (usually). So, the same feelings came rushing back again.

Spontaneous crying, sadness, guilt, pain in the chest. That started Sunday and progressively got worst until last night - the night I came home from work to see what was left of my beautiful baby. As soon as I saw the little fabric covered box that held her remains, I broke down. I knew I had to face it, so I went over to it and examined it. Morbid curiousity - I opened the box and was suprised at how little ash was in there. Then again, she was only 8 pounds.

And then I saw the little clay imprint the mortuary took of Naya's paw. This was standard with their service and I thought was wonderful. They put it in a nice clear bag with a ribbon. The thing that took my breath away (literally) was the ziploc bag with her fur in it. The night Naya died and I was making the cremation arrangements, the gentleman at the mortuary asked me if I wanted some fur. I didn't think twice and said yes.

Now, I don't know what I had in mind. I really didn't. Maybe just a "lock" tied with a string or ribbon. I don't know. But it was a bunch of fur in a ziploc. I held it up as my husband watched me look at it in horror and he said "Pretty raw, isn't it?" He said it best - it was a visual reminder of what had been.

After getting past the shock. I sat down and opened the bag. I touched the fur. It felt very nice, soft, like I remembered her. I am glad to have gotten it. I still can't decide if it's creepy or not but I like being able to "pet" her. Ok, maybe that is creepy. Anyway, the mortuary included two poems. The "Rainbow Bridge" and one cat specific. Also a sort of death certificate for her. Being that I've never gone through this before, I was very satisfied with their services.

I am not surprised with how hard her death has hit me, but I am surprised with the fear I have that I won't get over this. Actually, I know I'll never get over her premature death, but I hope that it will get to the point where I don't think about it non-stop.

Join in and write your own page! It's easy to do. How? Simply click here to return to Your Pet Loss Diaries - 'Naya & Jean'.