One Month Since Naya's Passing 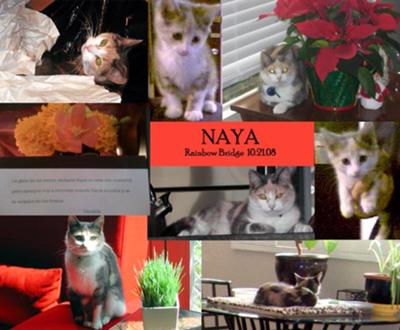 I haven't written in my diary as much as I have wanted to, but I have been thinking of Naya most waking hours of every day. Although it's been a month since her passing, I am still experiencing the pangs and waves. I have moments that I think "I can't really believe this has happened, I can't believe I'll never see her again."

Now, I know I will not, so I don't think it's denial but more exasperation. I went through that period where I wished that I would see her again. In a dream, an apparition, whatever. I haven't, not even close. I haven't done a proper memorial ceremony for Naya even though I received her ashes. I can't even look at the "urn" without breaking down, so I have put it in a drawer.

Initially, I planned on putting the urn up a little shelf and making a little shrine for her, but now I'm not so sure I can. Maybe in time. The last thing that really kills me is now that it's getting cooler (I live in CA so it's never cold), I pulled out a sweater and put it on. I was at work and looked down to see a strand of Naya's fur. That's really hard to take.

I still cry, a lot. More than I ever have for a human loss. I read the monthly letter Bunny sent and it mentioned that some people are curious why they don't seem to feel the same as others. It's just the way it is. I have had a lot of human losses in my life but never a pet loss like this. I am deeply, deeply connected to my animals and Naya, she was my best bud for 8 years. I don't even keep up human relationships like that (except my hubby).

I'm a sensitive person so I think that's why I've been taking her loss as hard as I have been. And again, it's one thing to lose an animal due to natural causes, but I was traumatized by what happened. Still am. To those who read this, all of us are individuals who have different coping and support systems. No two snowflakes are the same nor are two animals or two people. We all deal with things differently and there's no one that can say how you grieve is right or wrong.

Join in and write your own page! It's easy to do. How? Simply click here to return to Your Pet Loss Diaries - 'Naya & Jean'.