One Month Anniversary of Buddy's Death 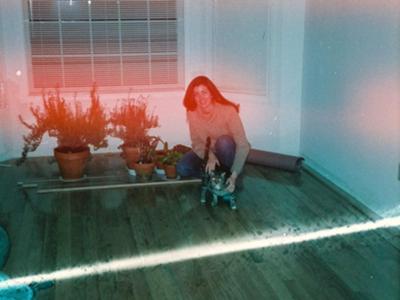 In our first purchased home - love and miss you Buddy

Today is the one month anniversary of Buddy's death. I can't believe it has been one month already since his passing. During this one month period, I've been keeping track of dates and going back in time to Buddy's last week alive on this earth. For example, last Thursday I was thinking back one month ago to when I brought him to the vet after work and how I wish I had him stay over for iv fluids. Yesterday, I was thinking how it was his last full day alive - a month ago.

I've been talking to friends who saw him when they came over to visit - and asking what they remember of him. They remember that he was very friendly, cuddly, and by October, a bit thin, but still happy looking. No one remembers anything unusual. As I had previously written, I've been wondering how long he would have lasted if he had stayed in the hospital for iv fluids - a week more? A month? Two months? Less? I would have taken anything.

I came across a reminder from the vet to bring Buddy in for his exam last August. I think that if I had brought Buddy in, his kidney disease probably would have been diagnosed then and I could have given him proper treatment. It's these regrets that are so awful. If I had done absolutely everything, I would probably feel better. I think especially with spring coming, I'm really missing him. He loved this time of year - sitting outside in the sun, running with great enthusiasm and taking a running start to partially get up a tree while making a half purring - half meowing sound. I'm used to him being outside with me.

I remember him sitting on my lap in my truck when I was pulling up to the garage door. I also remember him staying hidden under the basement stairs of the new house until he heard my voice and knew it was safe to come out. Now he is buried and I just planted some pansies on his gravesite. This gives me some comfort - tending to his grave. Also, my mother placed a stone with the engraved word "love" on it. I was very moved by this. I am going to try to attach a photo. The ground looks a bit scruffy, but it is because we are just coming out of winter - it will be more beautiful when the weather gets warmer.

I was invited to a movie at the cinema this week, but I'm not able to sit in a dark theater with this pain still in me. I have to be able to get to a window and keep busy sometimes, be outside, write, do almost anything, but I can't sit in a dark cinema and watch a film yet. I'm going to light a candle for Buddy in a little while. I was unable to upload the photo of Buddy's gravesite so I am uploading a photo taken six years ago when we moved to a new home and we were very happy - Buddy was younger then and healthy. Will send a photo of Buddy's site in next entry.

Join in and write your own page! It's easy to do. How? Simply click here to return to Your Pet Loss Diaries - 'Patricia & Buddy'.