3 Months Since You Were Taken Away From Us 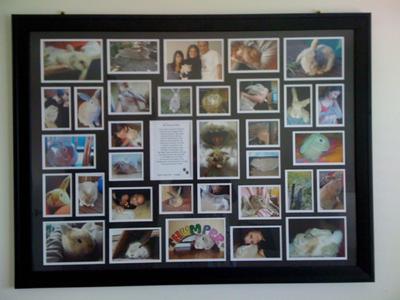 It's 3 months and my mind keeps playing back to the moment I got the news. I was calling my husband to say that I just got off the plane in Sydney and I was getting excited to meet him in San Francisco. I remembered saying something about how can one feel so lonely when surrounded by people everywhere, referring to airports being one of the busiest places in the world.

He then asked if I had called Tasha yet(my daughter). I said not yet and he said, "Honey, its not good news" and then he said "Thumper is dead!!" I didnt believe him but then he was crying on the phone and I remembered saying, "No, please dont say that!! I got to call Tasha" and I hung up. I called Tasha and she was crying. Oh My God, how did it happen? How did he die? He was ok this morning when we call the hospital.

Thumper had been admitted to the Emergency Animal centre the day before as he wasn't eating. He was being monitored and had food being given thru his nasal and it was a simple fix.

What we've come to know but unfortunately don't have enough evidence to prove in court is that Thumper was killed by the very people who were supposed to care for him. We paid big bucks so that our beloved baby boi had the best care. We strongly believe that Thumper was given a fatal dose that reacted with another drug which eventually caused Thumper's little body to go into cardiac arrest.

Losing a beloved pet is hard. It doesn't make it any easier either, if they die of old age or if they've been euthanized to relieve them of their suffering. But when a pet dies because of malpractice and negligence by someone who is supposedly a professional in taking care of them so that they can get better... who do you blame? What is duty of care?

I am still grieving and I feel guilty and I blame myself that I didnt speak up when my daughter and I went to see Thumper the night before. We did mention that he seemed to be so drugged out and he didn't seem to be Thumper, if that makes sense. Why didnt I speak up to ask, what is he being given? Cos, we trusted that they knew what they were doing? Or did someone decide to take matters in their own hands and give him that little extra.

Our beloved Thumper was taken so young, he was only 2 years and 4 months.. a baby. He had his full life ahead. We didn't care of the price we had to pay, we trusted them to get him well. They referred to his death as "Sudden Death!!" We call it, "Murder!!"

I am so very sorry, Thumper. We thought we were giving you the best care. I would never trust any vet or emergency clinics ever again.

My dearest baby boi, the day you died, part of me died with you and there will always be this emptiness in my heart. I Love You and your room is still the way it is. I finished the collage and hung in up in your room.

This poem is for you, Thumper,

If tears could build a stairway
And memories were a lane,
I would walk right up to heaven
To bring you home again.
No farewell words were spoken.
No time to say good-bye.
You were gone before we knew it,
And only God knows why.
My heart still aches in sadness
And secret tears still flow.
What it means to lose you,
No one will ever know.

Grandma (Your other mum)

Join in and write your own page! It's easy to do. How? Simply click here to return to Your Pet Loss Diaries - 'Sharran & Thumper'.