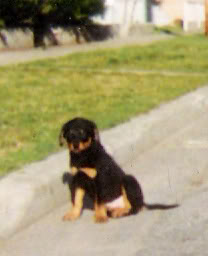 The first memory of China I can think of was when my sister took me to see the litter of pups. She wanted me to see her friend's puppies, I was happy since I wanted a dog but was told I couldn't have one of my own, I was 12 year old at the time.

Walking into the house I saw all the pups and the mom, the mom look like a German Shepard even though she was half Rottweiler. The house wasn't the best even at such a young age I knew that a pup should be allowed to be outside even for a short amount of time. When the mom was to feed the pup she and the pups were locked in a good size bathroom so she could lay down. When my sister and I left I felt bad for the pups but didn't know that there was something that I could do for the puppies or the mom.

Two months passed and my brother got a pup from a guy who had taken a pup from my sister's friend's litter. The pup was few beer and starving when my brother got her. He and his girlfriend at the time had to hand feed her for a week or more just so she would eat. My brother was big into wrestling and so was his girlfriend kids so they named her China after the female wrestler.

As the months passed China was well behaved and willing to learn. My brother was walking with China off leash when she saw something and went for it, that day marked the start of her not being able to move for 3 months really without help as she had ripped her tendon. As she healed my brother was going to move away for work so he gave her to me.

Since getting her I have never wished for another dog only wished that she never got hurt so that I might have been able to have one of her pups. As I would love to have part of her with me for always.

Join in and write your own page! It's easy to do. How? Simply click here to return to Your Pet Loss Diaries - 'Sheila & China'.