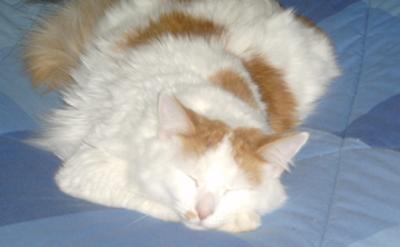 This is the three year anniversary of Sugarfoot's death. Death: God, that word will never be any easier to say. The time since he left, those first few days, the weeks that followed, passed more slowly than any time of my life, more slowly than I thought possible. I had never known or imagined anything in life could hit so hard as your death hit me.

At some point, half a year my mind wants to say, time began to move at its chaotic pace again. A month here; another there; a year. Two. Maybe this was a kind of defense mechanism that kicked into gear so that I could function again. Since he passed, my life has not been the same. I knew it would not be. The world just different than it used to be.

For his anniversary I knew there would grow in me a terrible dread. I would see his picture and map his peaceful, content face as it lay on the bed and cross it against the pain of finding him gone on October 29, 2008 on the sidewalk in front of my town home. So cruel life is. I am a caretaker of three pets now, but never will there be any beyond them: I cannot take the pain losing them will bear upon me anymore than I did take the pain of Sugarfoot's loss.

I miss you, my friend, and know that this will never--could never--fade; you are in my thoughts every inch as much now as you were on October 30, 2008. As much as the week after. And the long weeks after that. When I think of you I think to a time in my life when I viewed things differently, when I looked to the future without the weight of constant worry, when the world was far less gray. Please know that as long as I am alive you always will be with me: playful, happy, loving, so alive. More alive than I ever was. I will continue to see you in my dreams as I have many times since October 29, 2008; I will see you well, my friend; most of all ... I will see you. Look down on me from time to time, and look down on Simon, who misses you as much as I.

Until next October 29, you take care of yourself wherever and however you are.

Join in and write your own page! It's easy to do. How? Simply click here to return to Your Pet Loss Diaries - 'Sugarfoot & Joe'.