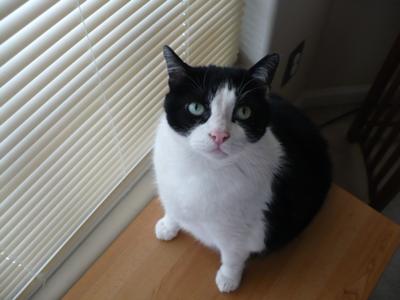 I never thought I would be one of "those people". You know the ones, those so obsessed with their pets they just aren't normal anymore; those who construct monuments and write poetry about their hamster or their parakeet. Yet, here I am sitting at the keyboard on a Wednesday morning around 1 a.m. finding it hard to admit that my life has been irrevocably changed by a small animal, a cat for God's sake. But it's true, so true. I never knew there was this feeling. Sure, I have lost my grandparents and even really close friends's parents and that is a loss we all experience but the loss of my baby, my Betty, my booboo kitty--well, it is so different.

Let me begin twelve years ago by telling you the story I have told hundreds of students over the past decade. I am a university professor. I teach communications courses to mainly freshmen and sophomores. I got my dog Lance, a twelve pound Chihuahua who still is a dead ringer for the Taco Bell dog. He is sweet and loving and kind and terribly nervous and protective. I had him about 8 months and he was a small puppy when my friend Diretha, who breeds cats, asked me to take a kitten from a recent litter of kittens one of her pure bred cats had after getting out of the house one day and getting nailed by the neighborhood Siamese stud.

Most of you know this ruins the cat's pure bred status and Diretha, being the ethical person she is (wink, wink) wanted to keep the expensive cat and her investment intact. So, she needed to get rid of the kittens and in a hurry. She said Don please take a cat to which I replied I don't want a boy cat because I have the boy dog already and that is enough piss in my house. Fine, she said take this one, it's a girl.

I take the kitten home. Lance is not sure what to think and I named her Betty--the reason for the name Betty can best be explained by a side story. One day when Betty was less than 2 and I lived in St Pete Fl, she got outside and was two houses down. A neighbor lady who was in her 60s with curlers in her hair smoking a cigarette in a raspy voice says to me 'She's over here.' When I get to her and retrieve her, the lady asks meanly, "Did you name her Betty after Betty Davis cause you are a gay?" and I replied, "No, I named her Betty after Betty Bacall because I am THE GAY!!!!"

So after about six weeks of calling the cat Betty, I noticed one day that she had balls. I'm no vet but I am pretty sure girl cats don't have those. I called Diretha, she said I lied, there were no girls.

Betty and Lance had a love hate relationship. For the first two years, Betty would not let anyone touch her and she often struck Lance with her sharp claws and drew blood but he protected her fiercely. I am single and have been single (for the most part) since I got Betty. I moved to FL and then TN and then back to KY. It's just been Lance and Betty and me.

Early on, my niece Amanda noticed that Betty would back up to her and shake her tail. Amanda, one day for some reason, just pulled Betty's tail. That was it! From then on, Betty wanted her tail pulled and often. We would lift her off the ground by the tail and she would come back again and again. She also loved to wait for Lance and jump him. She would hide and back up and back up and then pounce at the right moment.

Betty also loved to eat and eat and eat some more. At her heaviest, she weighed 21 pounds. She had bad dander because she just couldn't reach the spots on her back.

I am just putting down random thought about her now. She loved to go under the bed and into closets, especially when there was a thunderstorm. It would be sunny with not a cloud in the sky and she would go under the bed and soon enough a thunderstorm would erupt. The day she died, that night and for the next 3 days we had massive thunderstorms. I could see her sitting next to God saying Do it Again! Do it Again! because she was no longer afraid of them.

Betty would also go for months without meowing and then she would sing for days on end. All through the night and all day long. It was annoying and funny all at the same time. I wish I would have recorded now or videotaped her. She loved to pose for pictures and would look into the camera anytime I got one out. She also loved to sit under the Christmas tree, look out the window and sit on the dining room table--all for hours on end.

The first year I had her, I had a beautiful, tall Christmas tree and one day when I came home from class, I couldn't find her, she was INSIDE the tree asleep. I would also find my bed filled with ornaments where Lance had carried them in there. She knocked them down for him. I imagined him sitting there saying to her-Get that one! and that one!

The next Christmas we were in St Pete and I had a tabletop tree with little pink and purple shiny ornaments. She would get on the table and smack the ornament and it would fly off and she would chase it. She also loved to run and run and run. She would run and slide and skid backwards into the door or walls--sometimes really hard. She chewed every flower arrangement I have ever had in my house.

She didn't come near Lance and I in bed at night for a few years and then one night she just jumped into bed and from then on she came and went all night.

She loved to torment bugs, spiders and salamanders in Florida. Once while I was on a date and was sitting in the living room in FL, she came in and barfed up a salamander and then took her paw and slid it toward us as if to say, she what I got you.

This is only a small part of my memories of Betty. I will write more soon.