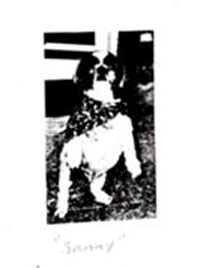 Today I lost a friend, not just any friend, but my very own "special" friend. Before "Sam" joined our family the four of us; Lois, Dawn, Andrew, and I sat down and discussed the certain needs and responsibilities it would take from all, if indeed Sammy was to join us. Now the Tschudy's may not possess one of the most luxurios homes that surround the area; however, it is big enough for all of us to share with more love that you won't find even compared to the size of the "Taj Mahal".

From the very moment I met Sammy, I just knew that all would be o.k. The kids took to him instantly and in the same fashion he to them. Although he was quiet at first, he was soon talking up a storm and everyone of us enjoyed our conversations with him. We soon discovered that Sam (who preferred to be called Sammy) had some peculiar characteristics, nothing bad mind you... but different to say the least.

For instance, his dining techniques were a wonder to observe. My lovely wife Lois is a great cook and enjoys preparing a variety of delectible meals to be served to our family. When in the kitchen preparing a meal, Sammy would start a conversation and talk and talk until dinner would be served. We generally served him first and I suppose he felt honored, as he literally dove into his meal. He never complained about the cooking, which usually consisted of grilled chicken, steak, Lois famous meatloaf, and fresh (and only fresh!) string beans. His dinner would be gone in a flash!

Sammy liked to putter around the front yard a lot. This is where you would find my neighbor Eileen and Sammy yakking away. Eileen would be laughing uncontrollably, always laughing, because Sammy had that ability. An additional hobby our new friend would often take part in was singing, especially if he over heard me singing in my imperfect alto voice. Sammy would chime right in for a duet. (Please note that in the years together no recording contract was ever offered to us, but... what the heck.)

For entertainment, we as a family, had no problem with Sammy since he never objected to family trips and visits. He most liked it when I would grab a ball and ask him if he wanted to have a catch... lets just say I never had to ask twice! In the evenings Sammy would watch a little bit of television, especially anything to do with animal shows as you can guess dog shows were his favorite. If they barked and yapped, Sammy would get a big kick out of it and attempt to engage them in conversation.

Grandpa Grorge, Lois Dad, and Sammy hit it off immediately and became more than fond of each other, they were like old time buddies. Grandpa, a widower, lived alone and would often call to his 'buddy' on the speaker phone. Grandpa soon became a 'special' friend to Sammy as well. On the occasions that Sammy would sing his very own (self composed) song for Gramps, the old gent would laugh until tears rolled down his cheeks. Sammy enjoyed evey second of it. The two of them hit it off so well that Grampa would invite Sammy over to his apartment to spend a weekend every now and then. Of course, we had to drive Sammy to Gramps place and make sure that he knew about the certain responsibilities of caring for Sammy.

As the years passed, Sammy easily became a part of us, a true member of our family. Yes, he did have his share of special needs, primarily, his eating and toilet habits, but when you grow to love a gentle soul, a loving spirit, then there is no sacrifice... no sacrifice at all. " You make a living by what you get... You make a life by what you give."

It has been more than a dozen years since Sammy came into our lives and so much has changed in that time. Grandpa has left us and a hole in our heart remains. Dawn has grown from a seventh grader to a third grade teacher. Andrew has gone from the second grade to his sophmore year in college. Lois is still as beautiful, both body and soul, throughout the passing years.

Finally,I have long since retired from the Police Dept. and now suddenly, without notice or warning, Sammy, my beloved Sammy, has left us too. So very special was Sammy, so loving so trusting, loved by all. No more quiet evening walks... No more songs to sing... No more love to give... Our hearts are broken... Only the memories to be kept in our hearts forever.

Thank you my friend, my very special friend, for when the gift of love is given, it can never be forgotten. You touched our lives with love and happiness; we are blessed to have had you as a member of our family. I take comfort in knowing that God, our Father, has brought you home. So my special friend, until we meet again, thank you my sweet Sammy, thank you for being my dog.