'Betrayed By My Own Dog' 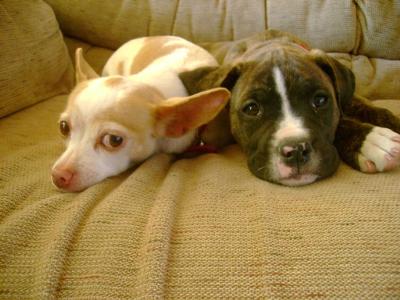 Bonnie, and Princess as a pup

I had two dogs, Bonnie, my chihuahua and Princess, a boxer/pitbull mix. We introduced Princess to an 8 year old Bonnie when princess was merely 2 months old. These two dogs grew a wonderful bond for the next 3 years. Then only a month ago my Dad brings a friend's dog, a boxer by the name of Tyson, his friend wanted to abandon the dog and my Father told him that he would take him in.

Tyson was only a year old, at first neither Bonnie nor Princess liked him very much because he was really wild and hyper. With careful supervision we got the dogs to like Tyson. Everything seemed to be all right. Until 3 days ago, for some unknown reason Princess attacked Bonnie and took out both her eyes, my Father was there eating dinner and he rushed out when he heard her yelp. Then quickly rushed my Bonnie to the nearest pet hospital. Unfortunately, I was at work, and my parents decided that I shouldn't find out till I got home.

They told the vet to do everything in his power to try to save my dog. After running a few tests and x-rays they discovered that Bonnie's skull was smooshed and that she had some brain damage. The vet decided that my dog was too old and that she would likely die in the attempt of the surgery. My parents decided that she should be put to sleep, rather than prolong her suffering.

So now I am sad, confused and angry with myself all at the same time. Sad because my friend died, and because my other beloved dog killed her. Confused because I don't know what to do with Princess. Should I take her to a shelter, or the pound, or should I give her away to another family. I do not know what to do with her, I still feel really sorry for her. I've ignored her for 3 days, we just give her food then leave her outside, I must admit that I am afraid of her now. But yet I still love her and sometimes I watch her wondering if she feels remorse or merely sad at our strange behavior towards her.

Tyson on the other hand, I feel, is more distressed about Bonnie's disappearance. He is constantly scratching my door, something he would do when he wanted Bonnie to come outside, and now and then he howls. He is such a sweet boy, so innocent and playful. Poor thing is probably traumatized for seeing Bonnie that way.

The other horrible news is that we think that Princess may be pregnant, we are taking her to the vet to check. We thought we would have some time so that we could get Tyson and Princess fixed, but in one month they seemed to have mated. If she is pregnant then again, I have no idea what to do. I'd probably give those pups away. As of right now we are going to look for a loving family to take Tyson into their household. He is so friendly and active that we think this should be no problem. I feel so sad that his other family would abandon him in his own house, but I don't feel like we should risk his health by having him close to Princess.

And where is Bonnie, well hopefully she is in a better place where there is an abundance of sun to lay under, and juicy bones, hopefully there is someone in heaven to rub her little tummy until I get to see her again.

I miss her so much, I can't sleep, I feel empty without her and I can almost still hear her little foot steps on my wooden floors. These last three morning I wake up and look anxiously to my side to see if this was all a bad dream and that my dog is simply hiding under my covers. but then reality hits me and the pang of grief hits me.

I really hope one day I can remember her without sobbing uncontrollably and feeling so angry at the form of her death. I feel so guilty, I feel that if I had been there or if we hadn't adopted Tyson than she would still be around me, sitting on my lap as we'd watch TV, or playing with my shoes at the foot of my bed. I realize it's too late for any of that, but I try to make myself content by saying that she is in a better place.

I love my Bonnie.