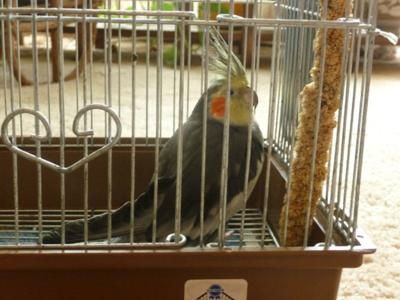 This is the last picture we took of Buddy, in the travel cage before we headed off

Buddy was our first cockatiel. He was eleven years old when we decided to let him go. He had an injured wing, and slowly deteriorated. He sat in one place on the bottom of his cage and his feet began to warp. Buddy couldn't even hardly get to his food dish anymore.

One trip to the avian vet told us that it was his time. There was nothing the vet could do, and he was getting worse. So, we took him home, cherished him for a few weeks more, and packed him up in our small carrier cage to go to the vet.

Buddy had been a happy, lively little chap in his youth. He spent his days with me, a young child at the time. I took Buddy with me everywhere. I was a very awkward child, had little friends at school, and he was my one and only undying friend. But, being only 8, I was rough on him without realizing it. He tolerated me, but later grew to loath me personally.

Buddy loved my mother, would sing to her whenever she entered the room. She could cuddle with him.

On our way to the vet, as I held back my tears, Buddy was terrified. I cooed for him, and he sang to me. It was the first time in months. And when we got to the vet, and I held him in my hands as he slowly passed, I gently rubbed his frail little head, and it calmed him.

But just before he left, he did one last thing that has stuck with me for the past few years. Probably with the last bit of strength he was ever going to muster, he reached his head up and bit my finger as hard as he could.

He passed with my finger in his mouth, and I knew that even if he sang to me, and let me pet him, that he was the same grumpy old man that I had secretly come to love. He wanted to let me know that, no matter how much pain he was in, things were still the same between him and me.