'Callie - I Love You More Than You Will Ever Know' 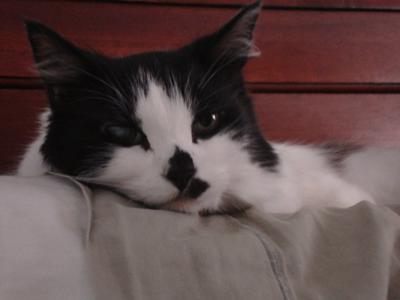 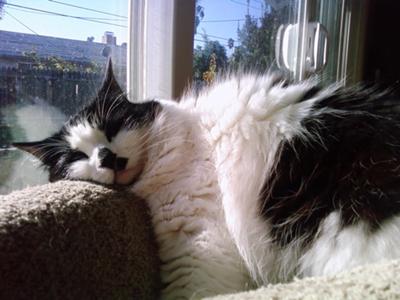 Basking in the sun on my chair. Her favorite spot. 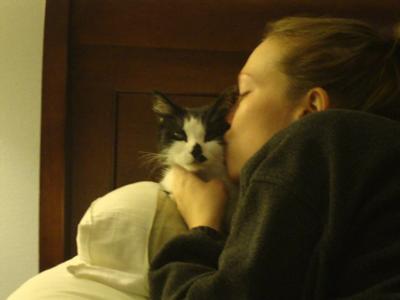 Kisses. Our last evening together. 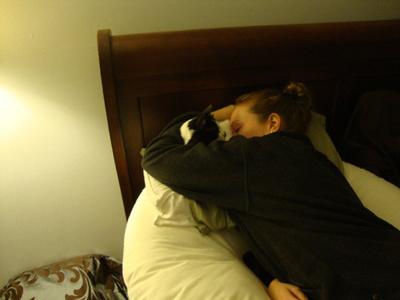 Hugs. I wish I could have done more. I love you baby girl.

My sweet baby girl came to me in 1998 when I was 17 and working in the grooming department of a local pet store. A co-worker had found her around her home. She was so tiny, and fluffy. She melted my heart from the moment I saw her. From then on, we were best friends. She was with me though every move, every milestone in my life, every happy and sad moment. I could always count on her to be there when I got home, and she could count on me to give her the world. She was at the door waiting for me to get home every day of the 12 years of her life. She sat with me every night in my chair, followed me from room to room, even waited in the bathroom for me when I took a shower. She was my shadow, and I loved it. No one else mattered in her eyes but me.

A little over a year ago, we had a scare when Callie contracted Giardia. The vet also found a mass on her liver but found it non-cancerous. I was about to leave on my honeymoon when she fell ill, which tore me apart. I hired a vet tech to stay with her and give her medicine as she was in really bad shape. I was so afraid of coming home to find that she had left me. But to everyone's surprise, she pulled through. It was like she was a new cat and she loved life. I was over joyed that my baby was ok.

6 weeks ago, I found out that I was pregnant. Callie started acting slightly different, but I thought that was due to her knowing something was in my tummy. She seemed to get over it and started sleeping with me in bed again. A few weeks later, she wasn't eating her food as normal. I thought she was bored with it, so I bought her a different kind and she ate again, but not as much as usual. Last week she began to not want to eat at all. I switched food again, which she ate, but only for a short time. I gave her wet food and the same thing happened. By Saturday she hadn't eaten anything in a couple days, so I tempted her with tuna, treats, anything to get calories in her. She was very tired and just slept next to me all day. I wanted to take her to the vet, but my husband wanted to play the "wait and see" approach.

Sunday afternoon I noticed that her gums were yellow, and with research on the internet, it was most likely Jaundice. I took her to the vet first thing Monday morning and they sent me to an internal medicine specialist. He did an ultrasound and by the look on his face, I could tell it was bad news. He told me that her liver is diseased, but the thing that was causing it was that her spleen was enlarged bigger than he had ever seen before. He said that it was either Lymphoma or Mast Tumors, both which would kill her. He said that he could do a biopsy, but the fate would be the same either way. And that they could start her on chemo, but that would only prolong her life 6-8 months. He told me that in 1-2 days she would become very ill and in pain, and recommended euthanasia. I burst into tears. I couldn't believe what he was telling me. I only had 1-2 days left with my best friend in the entire world? So suddenly!?

He offered to put her down while we were there but there is no way I was going to let that happen. I took her home and she crawled on my pillow and rested. I was surprised that she ate something that night and was very alert, but I attributed that to the IV they had given her. It probably made her feel good temporarily. That night, as she laid on my pillow, I talked to her. I looked into her eyes and told her how much I loved her, and how I was so sorry that this was happening. I told her that she was my best friend and how I didn't know how I could live without her. I praised her and called her my boo boo and my pretty Callie, she always loved that. Her eyes never left mine the whole time I was talking to her and she purred gently. I feel like she was telling me that it was ok, and that she loved me too. At least that is what I hope it meant.

My heart was broken in two. I balled my eyes out and had my husband take some pictures of me hugging and kissing my poor Callie girl. I posted those pictures here. I cannot look at them without bursting into tears. I went on the internet and did as much research as I could to find any other option... removing the spleen, feeding tube for the liver, anything I could find, but the spleen cancer did not have a success rate even upon removal longer than 8 months.

The next morning, she got up with me and sat in my chair with me as I watched television, then, she got up, and walked back into my bedroom and back to my pillow, where she did not move for hours. She slept all day and I knew she was taking a turn for the worse. My husband kept saying that maybe it was time, but I couldn't do it. I could not sentence my baby girl to death like that. Her own mother deciding when she should die? I couldn't bring myself to do it. I went to bed that night and laid my head on the pillow with her, but at 10:30pm she jumped off the bed and I followed her. She went into the living room looking very confused, wandering from corner to corner. She then stopped in one corner and urinated on the floor and on herself. I picked her up quickly to clean her off. She looked at me with fear in her eyes. As I cleaned her, she purred like I had never heard before. It was loud and deep, I knew this was the end.

When I was done, she got up and walked to the kitchen to go out the dog door, but I stopped her. She is not an outdoor cat. She wanted outside desperately, we think she wanted to go out to die. But I didn't want to chance not being able to find her or her laying in pain for hours. She turned around and went into the bedroom, walking like she was dizzy, where she put herself in her cat carrier (which she would never do, she hated that thing). She looked like she was in pain, as she would not lay down. She just sat in there and purred to herself quietly. I had read on the internet that cats sometimes purr when they are dying to calm themselves and think of comforting times. We closed the door and drove her to the emergency vet. I cried the whole way there.

When we got there they took her away to put a catheter in her arm and then brought her back to me. She was so scared and wide eyed. She rested her head on my shoulder as I talked to her, telling her over and over again how sorry I was and how much I loved her. When the vet came in, she gave me as much time as I needed just to hold her. She curled up into a ball and hid her head in my arm. I kissed her over and over and repeatedly told her I was sorry as the vet injected the medication. I felt her go limp, and then I felt her last breath. My heart broke in half and I yelled "NO!!". I couldn't believe what I had just done to my baby. She trusted me and was looking to me for safety and I let her go. I failed her. I cried uncontrollably and kept repeating "no, no, no, no, I just killed my cat, I killed my best friend". I will never forget that feeling of her going limp in my arms. She did not deserve to die that way, she should have died of old age in the comfort of her own home.

I feel as though I cannot forgive myself and the guilt that I feel is unreal. I keep thinking about what I could have done for her, I should have taken her to the vet sooner, maybe they could have caught it and saved her. I should have had a follow up ultrasound months back like the vet suggested to check the mass on her liver. Maybe we would have found the cancer in her spleen early and she would still be here with me today. Maybe I took her in too early and let her go before it was her time, or maybe I should have let her pass at home.

It has not even been 48 hours since this has happened and I don't know what to do with myself. Everything in this house reminds me of her. Her fur still covers the arm of my chair that she would sit next to me in every day. I keep expecting to hear my little elephant loudly trampling down the hallway on the hardwood floors, followed up by her meowing at me and jumping in my lap. I woke up yesterday and instantly started balling. It was the first time I had woken up without her in 12 years. I am distraught, and the only thing that has given me any peace is to read the stories that other people have posted and know that I am not alone. I am trying to pay extra attention to my 2 dogs to take my mind off of it, but now I am afraid of getting too attached to them. I keep replaying the moment that she passed in my arms over and over again. I wish there were a quick fix to this, but there isn't.

I'm sorry that this is so long, but I wanted to get the full story out there.

I miss you so much, my sweet Boo Boo. You will always be my baby girl and I love you with all my heart. I hope you can understand why I had to do what I did, because I don't understand it. Please forgive me and know that you will be in my heart always. You were my best friend and constant comfort companion. Your mom loves you honey bear.

Until we meet again someday, you will never be forgotten.