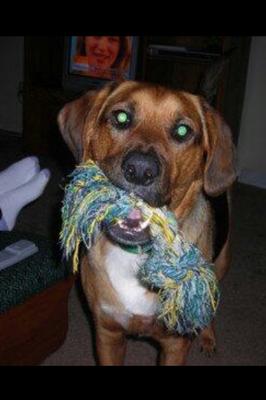 His favorite toy and one of my favorite pics

Hi my name is Terri I've always loved dogs there is just something about them. Anyways 2007 my sister and I got an apartment so we thought it's not a home until we have a dog so we adopted.

Once we got to the shelter we looked and looked, every dog in there was barking except one, a beautiful Shepherd mix. We looked at him and smiled then walked out and while every dog barked again he just looked at us with his amazing brown eyes and expressive eyebrows. Right then we knew that's him our new dog.

We named him Cesar, they told us he should only be 60 pounds but we ended up with a 130 pound dog! But he was ours and we loved him so much he made it so easy. Shortly after having him his fur started falling out so a trip to the vet let us know he was allergic to fleas which made me smile because a dog without fleas is like cereal without milk but we did everything to make sure when it was flea season he was taken care of.

Other than that Cesar was a healthy guy and has been living with my mom for a couple years doing great with her dogs until Thursday 9/20/2012. When I called my mom to check on my daughter she told me Cesar has been getting sick with blood coming out both ends so my sister made him an appointment to the vet which was at 5.

By 5:45 Cesar was dead, he went so fast the vet couldn't even give me answers to what happened. So I asked for an autopsy because I had to know. I got the call Friday while at work (terrible timing) which the vet still had so little to tell me except that my dog could've died from many things.

To put an ending to the story Cesar meant the world to me and I love him very much and I'm having the worst time facing this. His death came so sudden and so unexpected I can't wrap my head around it and with no clear answers I feel lost. He was only 5, so young so beautiful, the most loving. I cry every day it's terrible.. I feel cheated from the life we was supposed to have together but today I made him a shadow box and will get his ashes Monday and I'll feel better that he is with me again.