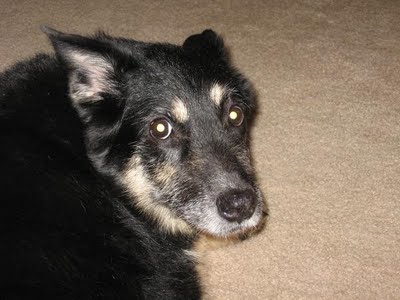 On August 21st I found my dog of 11 years unable to walk and in great respiratory distress. A trip to the vet revealed that Clancy had congestive heart failure and a mass in her abdomen that was most likely cancer. I took her home briefly, brushed and petted her for a few hours, and then took her to her favorite park, where I fed her one last vanilla sundae from McDonalds, and scratched her head as we listened to a thunderstorm rage outside the car. With dread, I checked the clock every few minutes as her 5:15 appointment got closer.

Once we arrived at the vet I insisted upon being placed in a room immediately. She lay on the floor wrapped in her favorite blanket, and I continued to pet her and told her what a good friend she had been to me all these years. I know every pet owner feels that their animal is unforgettable, and in Clancy's case this is the literal truth.

I rescued her from a pound in 1998 - she had been abandoned there at the age of 5 by a family who was moving from the area. She showed her gratitude by never leaving my side. Whenever I left the house I would have to make sure that I closed all the windows, or else she would tear the screens and go looking for me. Once she realized she was locked in, she would raid the refrigerator. Ketchup was her favorite, although sometimes she would fix herself a breakfast of a couple raw eggs; once I found an empty container of butter hidden under an end table; unfortunately for her, she forgot to hide the lid, and she was busted.

When I got home from wherever I was, I would soon hear the sound of her jumping off of my bed, and then her galloping feet as she ran towards me. I'd spend the next couple of minutes being slobbered to death, and then she would nudge her head towards the cabinets where I hid her treats.

She lived a good life. Even when she grew old and was unable to go hiking as much as she would have liked, it was still never very hard for me to remember her flying through the woods chasing squirrels or rabbits. It's no exaggeration for me to say that people with 'real purebred hunting dogs' would look at her enviously, and tell me 'that's one hell of a dog you got there' as she strode proudly along our favorite hiking trail. Every few minutes her head would pop out of a bush with twinkling eyes to make sure I was keeping up, and then she would go bounding back into the brush.

The vet entered the room, and as we repositioned her, she abruptly sat up in a panic, seeking me out. "Daddy's right here" I whispered, as I moved back into her line of sight. She laid her head back down. I stayed by Clancy's head, so I could stare into her eyes and massage her head as the vet made the preparations. Clancy's eyes focused on me, and I could see that all the fight was gone from her. I leaned in close to her nearly deaf ears and whispered "Well done, good girl; I never knew love like I knew it from you."

The injections began, and within seconds her breathing slowed, and her mouth, previously clenched in pain, opened ever so slightly. Her tired tongue found my face. Her last gift to me was one of her patented Clancy kisses; the kind that sends the meek running for a wash basin with their dripping faces. "Start thinking of green meadows, Clancy," intoned the vet gently. "One with plenty of fat rabbits and slow squirrels" I added. I continued gently rubbing the bridge of her nose. Her eyes never left mine. The vet checked for heart sounds. "She's gone," I was told. " I know," I replied.

After petting my best friend for a few more minutes, I knew it was time to go; eleven great years had just ended with one awful day. Clutching her collar, I walked out into a world that would hereafter be a little less fun, a little less joyful, and little less full of love for me.