'Daisy, the Best Friend a Girl Could Ever Ask For' 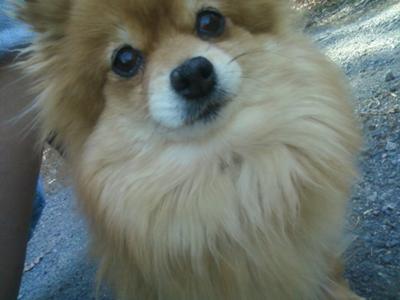 I was about three or four years old when my grandfather got a little Pom in his kennel of dogs he showed in major professional dog shows. She was a winning dog along with his Scotties, and other pure bred dogs. After a while he turned to a strong relationship with the Pom named Daisy. I would go over his house all the time, and she just caught my eye the first day he had retired her from being a show dog. I ran over to her play area and said "Daddy, I love her." and that's where our strong bond began.

From that day forward I begged and begged my Dad to take me to Grandpa's and let me walk Daisy. It became a ritual, once I was old enough for school, I would call my Dad when I got home and we went to Grandpa's to walk Daisy in the several acres he owned. I became older into my pre-teens and I still religiously went over there to walk her several times a week due to sports and homework I couldn't go over everyday which broke my heart.

After my grandfather passed of grief from my grandma passing my uncle took a certain type of protection to her and that she was sentimental to him, since she was so close to his dad, which is totally understandable. I wanted to bring her home with me since she was getting old, but he couldn't part from his beloved Daisy. I still continued to go over to the kennel to visit her as much as I possibly could due to a 35-40 minute time difference and not having a license yet.

It was the summer of 2011 when one cool night when my Dad and I were down the street I said "Let's go walk Daisy!" He looked at me with those eyes that just scream "I have terrible news." I looked back and I said "No.... No, you're joking." He hugged me and said "Sadly, I'm not." I have never cried so much in my entire life. This was the first death experience other than a few hamsters that I have ever encountered in my fourteen years of life. It's been about a year now, and the thought of her just won't go away... I just wish I could take a walk with her one last time, but the walk would never end. I guess that won't happen until my time comes to pass, but at least I'll be greeted by my babygirl <3

Rest in the sweetest of peace babygirl, I hope you're always watching over me and every morning on my run, I imagine that you're here running along side, healthier than ever. I love you Daisy