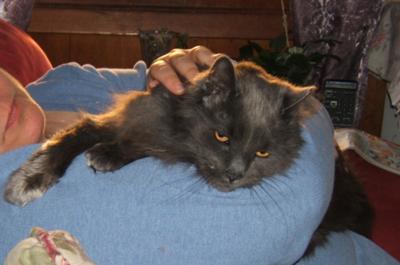 Daisy Left our lives as quietly as she came into them. When I was almost six years old she appeared one day A grey fluffy scrawny kitten, with a tail broken in at least three places. My mother fed her, and we gradually worked her into our home. We lived with my grandparents at the time and my grandfather claimed he didn't like cats. We caught him giving her pets many times throughout the years. It didn't take long before she was a part of the family, my furry sister.

I have many fond memories of growing up with her by my side, Like the way she would actually play hide and seek outside. Of course she was the seeker. Winters when she would come home and her belly would be covered in snowballs. We sometimes didn't get along, not unlike true sisters. She was my mothers cat truly but my friend. When we moved it was hard on her, the once confident indoor outdoor adventurer couldn't even stand to look out the window, at least for the first year.

She was already twelve by this time. The move was the start of her decline in health if only by tiny almost unseen degrees. She still did funny things like being nosy she got an easter basket stuck around her middle and went careening through the house. Or the moments she would cuddle with me. If I try I can remember how she looked when the word 'treat' was uttered or her expectant meow. Her purr wich so resembled a bumblebee buzz.

As the years passed she lost muscle in her rear legs, and developed cysts on both sides of her spine in back. At first they were small and would come and go. The vet wasn't too concerned as they didn't bother her yet. I got my own cat in a stray much like Daisy, Daisy got an unwanted playmate. They both adjusted. Daisy's fourteenth year brought another new addition to our family and the loss of some of her sight. Daisy was one of those cats who faced her developing challenges with such grace we didn't realize how bad they were until we looked back after she was gone.

At sixteen Her final year was the hardest, my mother and I discussed putting her to sleep many times. We just weren't ever sure if it was "the time." She could barely jump anywhere and resorted to hauling herself onto beds with her still strong front legs, We watched and tried to decide if it was time to end her suffering or wait a bit longer. When Tucker came along, the would be fourth feline family member. We had decided that it wasn't fair to Daisy to let her suffer any longer. Her eyesight was pretty bad, she had only enough muscle in her legs to walk, and sometimes badly even then. The cysts that had appeared had become bad enough that it hurt her to be petted, and she couldn't roll over for her beloved belly rubs.

So A year ago today 4~20~09 We brought her to the vets, I think she knew it was time, because the normally very vocal girl was silent the whole ride. We took her into the room and cuddled her for the last time and stood with her as the vet put her to sleep. It was the hardest moment of my life to say goodbye to her. I cry even thinking about it. We hadn't planned ahead enough to cremate her, my mom hadn't wanted to, although now we wish we had. But we buried her out at my grandmothers where we both grew up, in the garden under a willow tree facing the beach. It was a place she loved when she lived there and felt right that we lay her to rest in her favorite place. It's a very beautiful place, peaceful under the tree with sunshine streaming through the branches and wave lapping in the background.

It's already been a year since we let her go, and it hurts as much now as it did then. But I know she's no longer in pain, and we'll see her when it's our time. WE love and miss her every day.