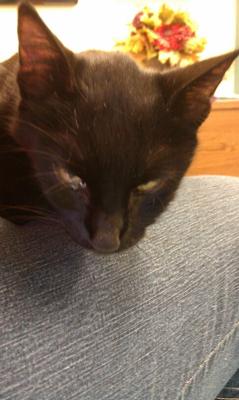 I adopted Desi less than 2 years ago along with 2 other older unwanted black cats from the Humane Society. She didn't like the other cats and was always by herself. She was declawed and couldn't really defend herself very well from the others. I used to keep her in my bedroom at night with me.
She was very heavy when I got her - 15 pounds!
Right after I got her, she became ill and wouldn't eat. I spent a lot of money to get her well again. She seemed fine after that.

I moved in with my boyfriend in January in order to save money - the economy was killing me financially. He doesn't allow pets in the main part of the house. So he gave me the sunroom for all of my babies. It's a huge 13' x 30' room. Nearly as large as the 1 bedroom house I gave up.
I went out daily to spend time with all of them. Desi would climb in my lap as her rightful place. I would read a book and she would sleep on my lap.

But then I had a financial blow and had to take on a 2nd job. I've had the 2nd job for a month. I wasn't spending as much time as I wanted with my babies, but I was going to remedy that with my annual 2 week vacation.

I screwed up because I wasn't spending time with my babies as more than cleaning the litter box, putting out food and water, and a quick pat on the head. He advised he felt it was her heart. I would need to spend thousands of dollars and it really wouldn't improve her quality of life, just prolong it.

He recommended euthanasia to spare her further pain.

I knew he was right. She wasn't going to get better. I have only myself to blame for it.

Yesterday I euthanized Desi. I took a couple of last photos of her in my lap, waiting her turn.
I broke two promises to her yesterday and I think I broke her heart with those broken promises.
My first is that I would never take her back to the Humane Society and the second that I would make it better.

Broken promise 1: I took her to the Humane Society to be put to sleep.

Broken promise 2: I didn't make it better. I just ended it because I couldn't fix it.

In my last photos of Desi, there is a tear in her eye.
My sleeve was wet where she'd pressed her face against it while I held her waiting her turn in that little office.
I can't stop crying.
Desi was only 10 years old. I loved her, but I screwed up and she paid the price.