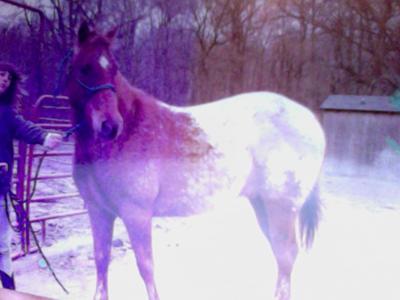 In August of 2010 I was given the opportunity to lease and train a horse and show him in the county fair. This horse's name was Doc. When I first saw him I hated him. I hated the Appaloosa breed he was. I thought he was the ugliest horse I'd ever seen. But I agreed to take him.

This horse had been abused for years and fortunately got rescued. So he made me earn his trust and once I had, we fell in love with each other. He became the most important thing in my life. I developed a very deep bond with this horse in nine months. I knew him better than even his owner did. And I was with him more than anyone.

In July of 2011 I showed him in the fair. Even though he didn't win first place at all. He won fourth place in a halter class he shouldn't have been in. And that's extraordinary. He won second place in two other classes. I cried out of being so proud of my baby. When the time came to leave him I cried. But I was happy to know he was going back to a good home.

Two months later on September 27, my mom told me that his owner's daughter called and said that Doc died the night before. The first word out of my mouth was "Why?" But then I fell apart into a mess of tears and screams and sobs. My mom told me that he had broke a leg and, out of stress, he either had a heart-attack or colic killed him.

Even though it's been four months now and I own a horse that lived with Doc, I still cry like it happened yesterday. It's a daily struggle still fighting that I know he's gone but it seems unreal. But I always remember he's in my heart and he won't ever leave. He's not in pain anymore and I'll see him when my time comes.