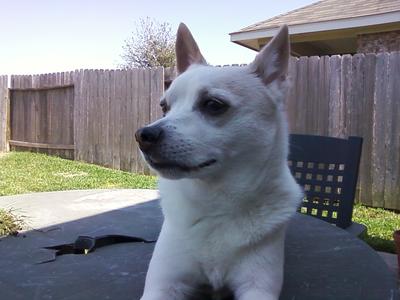 My baby boy enjoying the fresh air as he always liked to do.

On May 31, 2003 I heard a knock at my apartment door and it was my young female neighbor. She asked if I wanted a dog because she had just found two badly abused brothers in the park. We had put down our 13 year old Cocker Spaniel and I knew we weren't ready for another dog, but I told her I was willing to help. We were able to get both aggressive dogs out of her car who were lured there with a granola bar and put them into a crate.

The next morning at 8am there was another knock at my door and again it was my neighbor. She was there for assistance in bathing the two brothers. They were infested in fleas and with some dish soap we were able to clean them up. I had to put antibiotic on one of the brother's paws because they were badly torn up.

I kept him because the neighbor already had two dogs plus one brother so I offered to keep the second. The plan was to find him a good home and he ended up in my good home.

It was work with him because he was very aggressive. He remained agressive but had toned down some especially with family. He adored me just as I adored him. We played, ate, and loved to sit and watch TV especially football Sundays.

I went to visit my mother and Flaco managed to get out of the fence as he had been doing for the last few trips. No matter what steps I took to prevent this on Saturday, Oct. 11, 2012 at 8am or so he was hit and killed by a car that did not stop. I saw my baby die in the street and couldn't do a thing.

The night before I had broken my thumb and I felt so very helpless. My mother's neighbor took us to the vet but now in retrospect I have come to realize that he had died in the street. I had to put him on ice to make the 3 hour trip back home. My Houston vet met me at the office and we said our goodbyes. He was going to be cremated and the little cow town we were in simply saw him as a dog. He wasn't. He was my baby and the reason I brought him back to our vet in Houston.

It has now been 2 months and one week although it feels as if it were yesterday. I miss him so much. I still have my 13 year old rat terrier, but none the less it is a big loss. My rat terrier didn't seem to mourn him, but he too saw the incident. I assumed that is why he didn't have such a difficult time.

My rat terrier is my confidant and buddy. Flaco was my protector and buddy. I miss him so.