'Grieving Over The Death of My Bella' 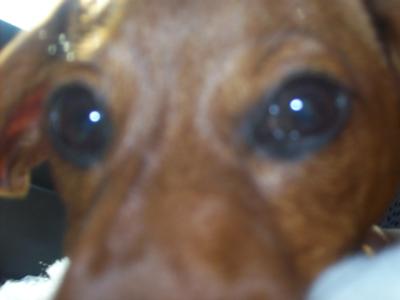 It's been almost 4 months since my little dachshund named Bella passed suddenly, and every single day, I think of her, and weep. The night is the worst time for me. I lay in bed crying uncontrollably sometimes, thinking what if I had done something differently. Sometimes the pain is so great that I can not stand it.

All that I can do is pray to God for the pain to subside.
I know deep down inside some day it will get better as long as I have faith in God.

I was very blessed to have Bella in my life for 14 short months. I can't believe she is gone from me now. I guess it's especially hard for me, because of the way she died.

If I had only known that she was poisoned. You see, I have another dachshund named Brownie. Brownie was sick about a month before Bella passed. Brownie had gotten whip worms from a stray dog that I had taken in for a little while.

I had never heard of whip worms, since I really had never been a pet owner or lover before I got Brownie and Bella. Long story short. I thought that Bella had gotten whip worms at the time she died, because she had the same symptoms that Brownie had one month earlier, and also I had read online that the whip worm stays in the oil for years, and that your pet's can be infected for years.

So, I gave Bella the medication that I still had from the vet for the whip worms. Bella seemed to be doing better the next day which was a Saturday. Well, about 1:00 am. on Sunday morning, my Bella took a turn for the worst. At the time I was not thinking anything else but she must be badly infested with whip worms. It never crossed my mind at all that it could be "poison".

Bella died about 11:00 am. on Sunday morning. I feel very responsible for her death. Even though the poisoning was from her eating a dead mouse (which had been killed with rat poison) from my neighbor's yard. If only I had known what it was, I would have rushed her to the vet on the first day she had shown symptoms of being sick. I believe if only I had taken her to the vet, she would still be alive today!

I will always blame myself for her terrible and sudden death. I pray that she forgives me. I love my baby Bella with all of my heart. I will never forget her loving personality.