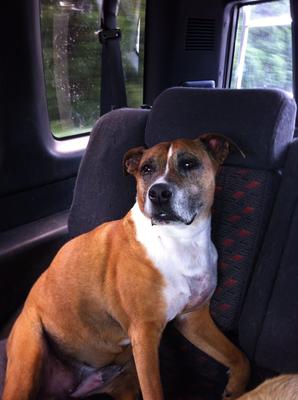 I have recently lost my precious dog Gypsy and to be honest I don't think I'm coping too well. Gypsy was eleven, not that old and the vet said she should have lived to at least 14 years.

Gypsy was our first dog we got her as a pup of four weeks when she was found by our nephew in a box in a tree abandoned. That week in the papers were similar looking puppies that had been found all over town dropped off in different places.

We took her to the vets to be checked out and found out that she had a mange, a condition that involved bathing her with an expensive lotion every day then weekly and finally after a year we were able to stop. We were told not to let her breed as it was genetic not contagious. I never really knew what breed she was but I always said mongrel if anyone asked..

She went everywhere with us fishing, car rides even parties we never left her behind. She was a great frizzy catcher, ball retriever, soccer player and played the balloon game, her favourite keeping the balloon in the air with her nose. If we were ever going away and our bags were going in the car she would run around and collect all her toys and put them in the car and then sit there with them waiting for us to come.

Gypsy looked after her toys and never wrecked them, so would get quite upset if another dog came to visit and she would fetch her toys and they would chew them and wreck them and she would cry. Gypsy was a very knowing dog who seemed to be so intuitive.

We got a second dog when she was four a golden male Labrador puppy. From the moment he saw gypsy he loved her though she wasn't too impressed initially but they soon became great mates and were together till she died.

In the last nine months she started to snore louder than usual, didn't bound up the steps but plodded and appeared to have a limp, which we thought was the back leg but was actually the front leg. Soon she was struggling to get on my bed where she slept with me.

After a few weeks I took her to the vet and they found a lump in her chest that was making her limp. Not thinking anything serious I asked for anti inflammatories. The next week I got an X-ray and an ultrasound. They found a tumour which was inoperable and pressing on her wind pipe. I asked for a second ultrasound and biopsy which they did unfortunately they never got enough cells for a diagnosis but told me it was abnormal. I was hoping for an abscess!

I took her home on prednisone & codeine. She seemed a lot better though would get nauseous and regurgitate. I believe now it was the codeine. Hindsight's a great thing but all too late. I was worrying about her and going home in my lunch hour to check on her. I never left her except to go to work. My son flew up after a few weeks from Queens town to spend some time with her and say goodbye.

We decided on the Saturday, he came and I made the appointment to have her put to sleep. The day before we took her to her favourite place the beach. She swam, fetched the stick, ran up & down the beach and told us all off for sitting and resting when she wanted to play. When she wanted to go home she let us know and walked up the bank to the car looking back at us and saying come on with a woof.

On the day of her death we took her and Beau for a big long run round the park. It was blowing and raining but she didn't mind. Then it was time all too soon and off to the vets we went. There're six of in there with the vet no one would leave. They took her out the back and put a catheter in her leg. When she came back she was so happy to see us all and like ok I've been good the vets done his thing lets go. I wanted to pick her up then and there and run away with her, but it was like everyone was waiting for me expecting me to do this.

I'd taken time off work etc etc the vet said there was no hope for her and she was only good from the prednisone. I keep asking myself over and over did I do the right thing? What if she did get better on the medicine?

We brought her home the next day as I changed my mind about cremation and glad I did because she is home with me now buried on the property. Not some ashes that I wouldn't even know were hers. I miss her every day and sit with her for at least an hour a day.

What do I do now? Beau my other dog searches for her everyday, keeps thinking he hears her outside and now has lost all his confidence as she was very much the boss and he followed. I am really sad every day and miss her so much my heart aches.