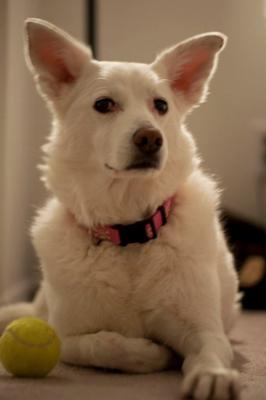 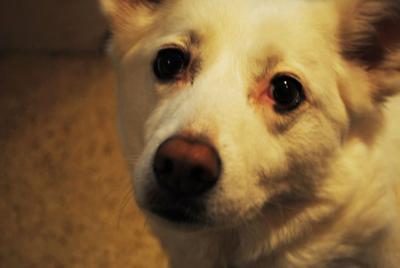 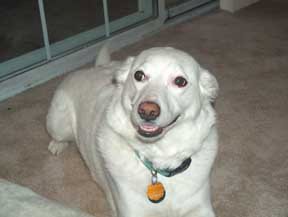 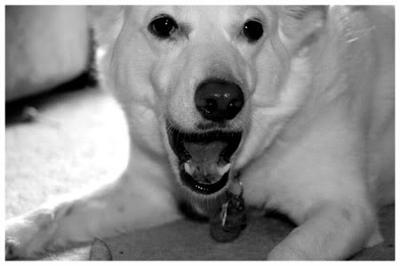 Around Valentines day, my beloved dog, Barbarella (Barbie) was running around our parking garage, (She loved to run... she was so fast - always racing and beating other dogs at the dog park). As she was running she slid on the slippery dusty ground and ran right into a pole. She injured her hip - we took her to the vet the next day who told us that she had a muscle separation and it would take five months to heal... Poor baby. It'd be months before she could run again...

About 2 months later, on Easter Sunday (Bad luck with holidays) Barbie was limping more than usual... I thought it was the cold and rainy day - I gave her one of her pain pills... and watched her closely. As the day went on she became more lethargic and refused to eat - not even a cookie!

My girlfriend and I rushed her to the emergency vet - she was falling over and unable to walk - in the car I looked at her gums... they were grey :-( I thought though, oh, the vet will just tell me that she is in pain or has a minor infection and tell me to stop over-reacting.. (something I did commonly with my dog... I'm her protector after all!)

But no... the tech told me she was in shock and took her back immediately... The vet came and spoke to us a few minutes later - I asked if Barbie would be ok, he said, "No I'm very worried about her. Her blood pressure is very low and her heart rate high. We think she has internal bleeding." He suspected rat poison - but we live in an apartment and I always watched her - it wasn't possible. He did tests... ultra sounds... pushed fluids and plasma... her red blood cells were so low.

We waited in that tiny room for what felt like hours - the vet came back and told us that she had a tumor on her kidney that had burst - that he could possibly do a blood transfusion and surgery but she probably wouldn't make it - that the surgery would only stop the bleeding and not rid her of the tumor... that she would suffer and run the risk of bleeding out at home. I had to make the worst decision in the world - I had to make the decision to put my best friend, my child, to sleep... forever. :-(

The day before she passed she was herself... a ten year old puppy... her birthday was the following Sunday... how could this happen? She was to be in my wedding... we were supposed to go to the beach so she could swim... and many more days at the dog park.

My heart is void and empty... our family is broken. It was so sudden - I just still can't believe it - two weeks later and it hurts worse and worse everyday. She was with me for nearly eleven years - she had the best foods... vet care... vaccinations... tons of exercise... and above all - love.

Her food dish still remains... all of her favorite toys... her dog collar hangs from the rear view mirror of our car.

She never got to run again... :-( this hurts more than anything.

We are seeing a pet grief specialist - it helps a little - for a few minutes- but I go right back into tremendous emotional pain and turmoil... the guilt is unmeasurable... should I have done the surgery?? She passed away in my arms - I was with her... if she had surgery she might've passed away alone and in pain... but it might've worked. I don't know if I made the right decision... :-( I feel like I killed my best friend.