'I Believe In The Bridge' 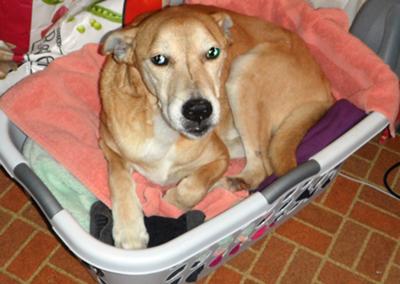 About a week after the decision was made I hired a company to install a fence for the two who remained, named Lost and Found. The day after the fence was installed I heard a dog barking and he sounded frantic (I knew it was not Lost or Found since they were in the house with me). I hurried up and got outside, afraid a dog was hurt. But there on the outside of the fence stood Revi barking his little heart out trying to get in to be with his brothers. The three "boys" became my children.

On July 13, 2009 Found had a massive heart attack and died in my arms. I thought the pain would never end for me or the two remaining brothers. They grieved for Found just as I did, laying in the spot they last saw Found laying. Found passed away by natural causes and by God's doing. I was able to accept his death knowing these two factors.

Well, this past Saturday I had to make "the decision" for Revi, who had lung cancer. At first I was going to have my brother in law take him to our vet but my mom talked me into taking Revi myself. I am thankful my mom had the determination in her to convince me to do this. I am grateful that I was there with him, holding and loving him, until his last breath.

No one believes me when I say that making the decision and then going with Revi was the hardest thing I have had ever to do or deal with in my life. (My own divorce, illnesses, hospitalizations, etc cannot even compare). It was the hardest thing; however, I would do it again, to lay there with my baby as he went to the meadow to meet his brother.

Lost, the surviving brother, and I are grieving together and I tell Lost all the time about Rainbow Bridge. I believe that when Lost's time comes he too will meet up with his brothers again and all three will be there happy as their hearts desire until I meet up with them and we all enter Heaven together.

Maybe I have to believe this because this poem says it all to me: "Animals are reliable, full of love, true in their affections, predictable in their actions, grateful and loyal. Difficult standards for people to live up to" ~ Alfred A. Montapert. My boys love(d) me unconditionally, something I have yet to find in a person. Therefore, God is cruel if he doesn't allow me too meet up with the boys to spend eternity with!