'I'm More Sorry That You Experienced the Pain.'

by Laura Kelly
(Orlando, FL, US) 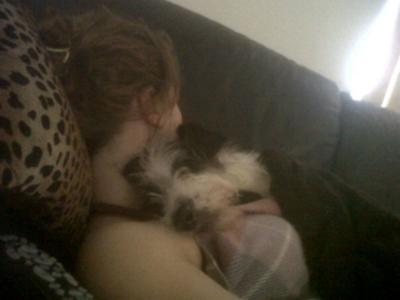 His last day, curled up on me. 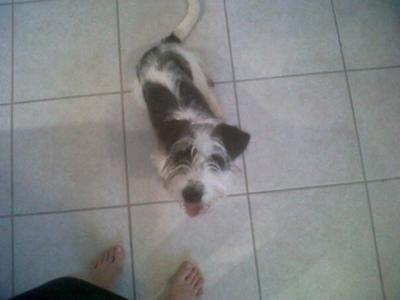 So excited when I got home. 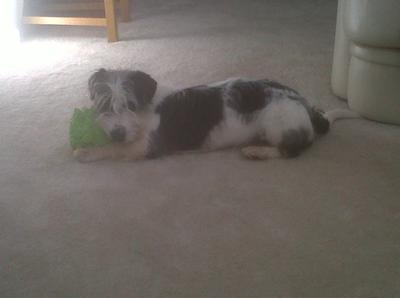 Playing with his new toy.

My dad gave me a card this morning, sympathising with my loss of Seamus. I walked into his room afterward, and thanked him - but also needed to state something: "I'm not."

I love dogs, and have been desperately wanting a dog for over two years now; granted that I intend to leave the state as soon as I can, however, I had been holding off. Still, I enjoyed looking at dogs on Petfinder, as a way to distract myself or take breaks from homework or so on. One day, I saw a group of five older dogs listed with a Rescue that normally had puppies only, and couldn't get one dog - Kelly, a Cocker Spaniel - out of my mind. That weekend, I decided to go see the dog.

Upon arriving, I went to sign my name on the sign-in list, only to see that the first slot, a family, had listed "Kelly" next to their name. I decided to stay, though, because the other dogs had held my attention, as well. An hour passed waiting for the dogs to arrive, and, as they did, I saw one dog in particular being taken off the truck and put in a kennel - and I had no eyes for other dogs.

Once my name was called, I pointed to the dog and said I needed to see him; he settled right in by my side, licked my hand, and obeyed me when I told him to do something. Rescue workers were genuinely surprised, saying he was never so well behaved, and that it was like he was already my dog; other clients thought that he was my dog, and that I was looking for a playmate for him. I spent almost four hours with him, all to myself, before I had to leave. I decided I would return the next day and see if he was still there, and have a decision made by then.

The next day came, and I almost didn't go; I called my dad, hoping he'd prompt a decisive response in my mind, and he did - I got on the road, my cat in tow, and went to see the dog. The trucks rolled up again, but no dog - until the LAST crate in the second truck. One of the girls from the previous day saw me and said, "Your dog is here," and handed him straight to me. Another worker helped me by holding him so that I could introduce them through the carrier; no response. Without the carrier: the dog licked her, straight on the nose, and she remained still. Perfection. The dog was mine. "Seamus."

We shared a week of wonderful times; he was active, playful, very affectionate and social. At all times, he wanted to be within two feet of me, and needed to be within eyesight; it felt, in every way, as though he had always been my dog. He responded to his new name, learned quickly, ate and drank well, had no troubles with Phinta or so on.

Then things changed. He started a cough; just a kennel cough-type-cough, I thought. Clear spit-up, no colour, no food - give him "cold" treatment and he'll be fine. Then he stopped eating. Okay, so his throat is sore/rough and the dry food is exacerbating it; wet food - he ate for a day.

Nearly two weeks, he ate virtually nothing. From seventeen pounds to twelve. I force-fed him as much I could; one piece at a time, while he fought. He never held it against me, though, and immediately curled up against me once I stopped. He drank, though... for a week. Two-and-a-half weeks in, no more drinking. Not voluntarily, at least. At that point, in addition to the force-feeding, I began to give him syringes of water, one at a time, until he stopped accepting them. Then it began again as soon as I felt he would drink. All-in-all, in his last days, I managed to get about a half-cup of food into him, and a half a bowl of water.

While all this went on, and before the final days of outright rejection of water, he went to the vet.

Vet #1: Anything from parvo to a cold, and wanting to test it all; he didn't realise I knew as much about dogs as I did. The blight of Banfield - their doctors are largely incapable, and they are corporate - it's ALL about the money. They had him for six hours, and in isolation, but refused to talk much more to me. A few prescriptions, and he was released to me again.

I got home, however, to find the antibiotic prescription, the important one, empty. Livid, I realised this meant Seamus had to go another night without the med, because they had closed right after releasing him. The next day, before heading back to my dad's house for a few days, I stopped to get the prescription refilled - and had to wait, again, for another exam, with a different vet. Two hours waiting.

Vet #2: Poor health. Duh. A cold. Really? A cold? This dog is dying. No, he's just ill. Meds will help him. Prescription. Release.

Turns out the first prescription could have made his liver shut down. The second was enough to treat a dog THREE TIMES his weight. I didn't know that, though, until Vet #3. Banfield, you will feel my wrath - and may God help you.

I came home, excited for my dad to meet my Love. Instead, he saw what I saw - the dog was very sick, and he was suffering. He was, by this point, in a diaper, and not doing much but lying still and curling up on me. To my chagrin, he nipped at my dad. Seamus - nipping? Not even a nip...a snap. What was happening? He was in so much pain. Why weren't the meds working? The first full day home, his breathing was so laboured his whole body twitched and writhed. I held him close and tried to help, but it was neurological - there was nothing I could treat.

Vet #3: An emergency visit to the one vet I trust. Anyone in the Pasco area, Companion Animal Hospital houses the best vet ever - and I would lay my life on her work. "This dog is critically ill." I knew that. Still, the words echoed, immersed me in a cold water I could not escape, robbing me of air. Pneumonia, though - that's good, three days and he could be okay. Three days of hospitalisation, IVs of nutrition and fluids and antibiotics, but he'd feel better.

It had been three hours. A call to the vet at 4:25 - checking in before the office closed. "You need to come get him; be here by 4:45. He needs to be transferred." Scrambling to dress, arrive... got there at 4:50. And waited. And waited. And waited. "They're gathering everything up." "They're finishing your charges." An hour "getting him ready?" An hour working on charges? I didn't think anything of it, then. I just wanted him back. I wanted to hold him and tell him he'd be okay, and for him to know I was there.

5:40. The vet had stayed late for me. She walked into the room, and her face... my God, her face. I knew. I mustered the best smile I could to show her it was okay, I was okay. Moments, like ages, of silence, stretching, small attempts at delay. Eye contact; I nodded. "I think your dog may have Distemper." Tears, already ready after I saw her face, began to sneak their way closer to the edges of my eyes. My dad, unchanged. I knew, though; I knew well what Distemper meant. It meant a spiral downward and no return. He had no chance. He needed freedom. My choice had been settled the day before - and I stood by it. "I'd cut my losses, and euthanise him.” My dad left to go to the counter. She lingered, though, and apologised to me; gave me a hug. I said I wanted to stay with him while they did it.

They brought him in: Oh, Seamus. A cone around his head. He had snapped at one of them. I put my hand immediately toward his muzzle; "He's still snapping, even though his pain is being controlled." He licked my hand. I rubbed my hand on his muzzle after I made sure he could smell it. He needed to know I was there. I needed him to know I was there. I lowered myself to his level, looked at him, told him how good a boy he was, what a blessing he was, how much I loved him, that the pain would end soon. I tried not to look away from his face; I tried to ignore the serum they were injecting. His eyes were nearly closed... eyelashes were blocking what little was open. The woman giving him the injection listened to his heart... he was in the anesthetic state; "He needs a little bit more." Leaves the room, I tell him again all the things so true and real, and never stop petting his muzzle. A little more. Listen. "He's at peace, now." A few tears slipped by. I'd held them while he was there - I didn't want him to feel something was wrong. He'd died looking at me, looking me in the eye. I wish I had asked for his ashes; I really do.

I want him back. I want him back, so badly. I love him and he was meant to be my dog; if I have a soulmate, I think he was it. I had just under three weeks with him by my side. He is at peace, though, and I believe it was how it was meant to be. Had I not taken him, he would still be in the pound, or in a foster, or on the street, or maybe in an unaware or uncaring home, and he could have suffered all the more. He had just under three weeks of love, care, and constant devotion. The last day of his time on earth was spent entirely curled up on me, and being force-fed and force-watered and given his medicine. He knew I loved him. He knew.

So, am I sorry? Am I sorry for the money spent, which is my dad's concern? For the time spent? In short, do I regret? "NO."

"No," "No," a million times "No." I love him, and he brought to my life a piece I had lost. In time, I will get another dog; no dog will ever parallel him, though - because he was truly, in every bit, my dog, and I was in every bit his human.

I am not sorry I experienced the pain. The fact of the matter is, I don't often let myself feel anything fully; I opened my heart to Seamus, and felt true happiness - and that means I fully felt the pain of his departure. For three weeks, though, I had my soulmate, and he will always be in my heart.

But I'm not sorry.