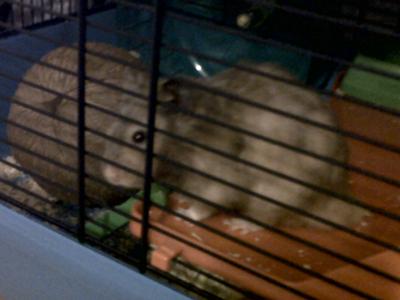 The most recent picture I have of him, but his cage is in the way.

Lola was the most gorgeous chocolate brown syrian hamster, whose coat faded over time. The little angel was getting on now, at two years and I had been worried about this moment up until the day. What is more, I felt extra guilty as I gave him (we discovered 'she' was a 'he') special care and attention when he was getting on but one day, when I gave him food and let him crawl back to bed; just that one day when I didn't give him his usual attention, sooner or later I discovered his peaceful death. It was quite heavenly, but very upsetting.

Anyway, I woke up next morning, my heart pounding wildly. A terrible feeling was building up, spreading around, overwhelming me. I dashed to his cage, knowing by instinct a catastrophe had happened. I looked at his cage and...

...Sighed in relief, as his bowl had been tipped upside-down. Haha! I chuckled happily. So I opened the cage and turned it the right way up, expecting to hear a rustle and see a pink nose but-nothing. My heart worked up again. Help! I looked through the bars to find a brown shape and prodded it gently. It was cold. It was hard. I was sweating by now! So I took the top of the cage off, took one good look and...
''LOOOLLAAAAAA!!!!!!!''

Lying there embedded in cottony bedding, was my hamster, paws neatly tucked in and eyes shut. Wouldn't that be just a saddening yet heavenly sight? Surely not! The poor creature had passed on, soul somewhat lost. How could it be?! He was closer to me than anything else!

Suddenly a gush of guilt raged through my body, sadness ambushing the room. I knew what I had to do.

Mournfully, I placed him on my lap, quietly spending time with him, hour on hour, until the time came. I placed him in the finest christening box, and found a sunny place in the garden to bury him. I then planted plentiful purple pansies around him. How sad I was.

I ordered a small gravestone which has arrived, and I take care of the plants to keep them going, like Lola's soul. It is still somewhere round here. He was my best friend! But until then, I will keep calm and carry on and keep him in my dreams.

I hope this story touched you xx