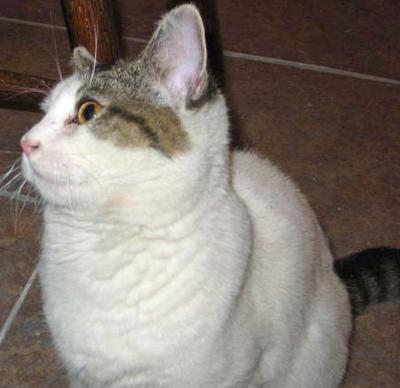 We only had him a year and a half, and he was only three years old. He died of heart failure right in front of us. Poor little Nemo was adopted by us because he was described by the rescue group as having "the face of a teddy bear." He had a slight head tilt and no one knew why, but we didn't notice it after a while. He looked normal to us. Everyone who met him asked what was wrong with his neck. We never thought anything was "wrong" with him.

He was always willing to play and would sprint around the house as if he wanted you to chase him. He'd play hockey on the floor with ice cubes. He was an indoor cat who loved his trips outside, even in the snow when his nose turned pink. He was a constant companion who would follow us everywhere, always interested in what we were doing. He wanted attention and he always got it from us. He would rest when we rested and not before.

Always on the go, he would "hunt" at night, whether it was car lights across the walls or bugs in the basement. He had a personality and character that will never be matched. We miss our little Nemo terribly.