by Frankie
(Toronto, ON, Canada) 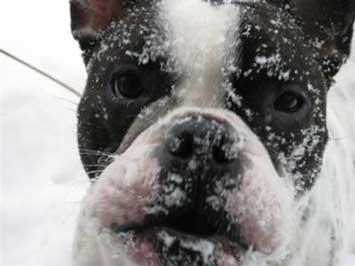 On my first date with Rob, I had to swing by his apartment to meet his almost one year old French Bulldog, Marcel. When I walked in the door I was enthusiastically greeted by a bouncy, white and black spotted wrinkle-head. I was charmed by Marcel’s huge pointy ears thinking they beautifully accentuated his uncharacteristically larger snout (usually Bulldog’s faces are more squishy like pugs), but what I really enjoyed was that even full of puppy energy, Marcel was content to just cuddle with me on the couch. I was amazed at how smart he was too. That first meeting, I rather quickly taught him to dance for me, twirling in circles on his hind legs for a treat suspended up in the air. On a trip to Paris that year, Rob hand picked Marcel from a litter of apparently more deserving pups – being told that this runt was not adoption worthy and would most likely not be put up for a new home like his bigger brothers and sisters. A sucker for the underdog, Rob had to have him and with French passport in hand he brought little Marcel home.

That was over three years ago.

Rob and Marcel were a package deal and as Rob and I solidified our relationship, it wasn’t long that I had to admit to Rob that he had me at “This is Marcel.” As time passed, that little runt… (one of our favourite pictures is tiny Marcel sitting beside a looming soup can)… grew to be almost a 50 pound power house, that loved to flex his muscles and puff out his chest upon meeting a new admirer during a walk. At first we thought that it could be from all those living room pirouettes, but every French Bulldog we met would be half to one-fourth the size of our Marcel. We concluded that they just must breed them bigger in France. That, and all the cheese of course.

It just wasn’t Marcel’s larger size that set him apart from all the Canadian-bred French Bulldogs, but there were other differences too. We lauded Marcel’s longer snout as the reason he didn’t have any respiratory problems and could run longer and harder than other Bulldogs. We chalked up all his ballet training to his endless jumping… (He jumped whenever he got the chance. He jumped on other dogs, on people, over park benches to head off a pack dogs running in circles around the park) …. And we were convinced his superior intellect and over-extroverted fondness for anyone he met was because of all the love and attention we constantly gave him.

Before I knew it Rob and Marcel had whittled their way into my heart forever. But when Rob and Marcel moved in, my 12 year old cat, Passy, was none too pleased. Passy pretended to be disgusted at this large easily excitable beast she had to share my attention with. In fact, she would ignore his presence given every opportunity, often walking by him with her nose in the air. And Marcel would oblige her and just wait until she passed before tearing off into the living room after his squeaky toy. Every time Marcel would jump up on the couch to cuddle, Passy would grunt and make a big production about how annoyed she was as she jumped down and left the room. I say she “pretended” because more than once we caught them sleeping together on the couch (albeit on opposite ends) and we were convinced they secretly got along when we weren’t home.

A little over a month ago when we arrived home expecting to catch Marcel and Passy spooning on the couch, what we found instead was a house filled with vomit. After a three day stretch on an I.V. at the clinic, Marcel was diagnosed with Megaesophagus, a condition where the dog’s immune system attacks the neurotransmitters that control the esophagus resulting in food and water not getting to the stomach. Instead, the food remains in the esophagus until it eventually is regurgitated. Usually diagnosed when they are puppies, there is no surgery or medication that can cure this condition however dogs can live relatively satisfying lives by modifying how and what they eat. When we used to praise Marcel’s French genetics, now at three years old we were cursing his overactive immune system. When we brought him home, I was determined to do whatever it took to live with this condition.

Not only did we have to figure out the right consistency of food (soft, mushy, semi-mushy) that would best find its way into Marcel’s tummy instead of our floor, but we had to feed him in a vertical position, with front paws up and Marcel standing on his hind legs. Some crafty owners of dogs with this condition have fashioned chairs (the “bailey chair”) which hold the dog’s fore-paws up, but we found it best for Marcel to put his legs up on a dining room chair and stand on his hind legs, for us to hand feed him his mush over his head. After he finished, we would hold him over our shoulder like we were burping a baby to keep him in this horizontal position for no shorter than 20 minutes. Being so heavy, most of this time was sitting on the couch, but when he would get squirmy and restless in my arms, I’d get up off the couch and dance around the living room. “I guess now it’s my turn for you to make me dance, isn’t it?” I’d whisper in his ear, “It’s okay, I’m a better dancer anyway.”

For a week or so, we seemed to be successful in keeping most of Marcel’s food and water down, but Marcel was still …off. His sleep was wrought with fits of shaking. He still had a “smoker’s cough” where he would spit up some food, saliva and or water, and just swallow it back down. The few times he couldn’t keep everything in and he regurgitated some of his food, were becoming increasingly harder and harder on him. He’d become a zombie-dog. After he’d vomit, he’d be glassy-eyed, unresponsive, standing very still – for minutes – until he’d finally snap back to semi-awareness. After these episodes he was not only more lethargic, but uncharacteristically fatigued and would try to get comfortable enough to sleep. He started to refuse any water as he realized this made him throw up, and instead took to eating dirt and household plants and frantically licking the floor for any bit of moisture. And then, he began to produce copious amounts of saliva. It would be dripping from the side of his mouth and pool on the floor.

After appointments with the internist and a neurologist, Marcel was diagnosed with an inoperable brain tumor (at the spine). The doctors were sure to point out that given his tumor and megaesophagus-like symptoms the only reason he was as healthy as he was, was because we were taking such good care of him. I didn’t appreciate how supportive that comment was meant to be at the time because all I really felt was helpless and guilty for not being able to do more to make Marcel better. They told us that eventually his other internal systems will fail. Soon, he won’t be able to hold his bladder, …he won’t be able to walk, …he’ll fall in a coma. With no medication or surgery to fix any of this and his esophagus problem becoming worse (to the point where he would regurgitate anything he ate almost instantly no matter how long we held him upright) we knew it was a matter of days before we’d have to make that last appointment at the vet. After a sleepless night of Rob attending to Marcel’s fits every few hours, Rob noticed that morning that Marcel began to exhibit a little head twitch. Before it got even worse for Marcel, the only thing we could do was to make the appointment to put him down.

That Sunday morning was grey and raining. As I am often not impressed with the obvious use of a rainstorm as a metaphor on TV to represent the main character’s emotions during a tumultuous development in the story - I couldn’t help noting the irony.
At that moment, it so aptly represented how I was feeling. Rob, Marcel and I spent that grey rainy morning cuddling on the couch for stretches as long as Marcel could stand it, before he had to jump down and cough and spit up more phlegm/saliva. When it was time to go, we bundled Marcel up in his blanket and brought him to the vet’s. Rob and I were with him until - after his very last needle ever - his deep round eyes closed and his big wrinkly head went limp. I remember not wanting to leave him there on the table, yet simultaneously wanting just to run out of the room as fast as I could. After finally tearing myself away from him, I stopped at the door and looked back at Marcel one last time before I began running.

The rest of the afternoon Rob and I spent puttering around our empty house like zombies, eating junk food and quietly watching TV. That afternoon, the clouds thinned out and the sun began to dry up our wet lawn. Rob opened the blinds to let in some light and said “Look, the sun is out. … It’s Marcel letting us know he’s alright.” As sweet as the sentiment was, I still felt like it was raining.

All day I was trying to be strong for Rob, but that night when we crawled into our empty bed it was his turn to comfort me. The minute I realized I wasn’t fighting a 50 pound dog for the covers, I lost it. I couldn’t stop sobbing until I actually fell asleep. Rob put his arms around me to try to comfort me, but all I could think of was how strange it felt not having a snoring dog between us. It’s only been a week since that night, and every night our once crowded little bed still seems way too big.


I miss you Marcel.