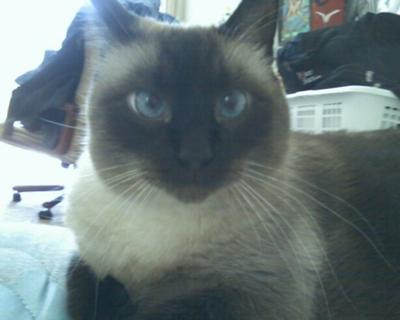 I was renting a Granny unit from my friend and a cat that was wild was in the back yard. She always had a bird or a mouse. I really never paid attention to her but I noticed she had magnificent eyes. I learned that she had belonged to a neighbor. They had brought her home and declawed her front claws. She got outside and they made her an outside cat. I have suspicions that her husband may have abused her.

I moved to a house where she became a completely indoor cat. I got to keep her for five years. One day she stopped eating and I took her to the vet. She had tumors in her kidneys and stomach and this would be her last day with me. I held her and told her I loved her as she passed. When I came home I found one of her back claws that she had trimmed off on the sill where she sat. It is in this picture with a lock of hair of hers. The picture is the one that you see above. It will always hang on my wall with future loved pets.

It still kills me to this day but I am getting better with it. I wrote a poem about her on this site. This image in the poem was a picture that I took of my cell phone image. I just found out how to get it off the net and wanted the original picture posted instead of a poor copy. Mitze (she had black mittens) was the best. I miss her so much but thank god for every minute with her. She was very loving and I cannot belive that she did not get love from anyone before me.

I miss the purr and baths she would give my face while I was watching the TV. She was a true friend that helped me through hard times in life that I was going through. After she passed a couple weeks later I woke to her meow and saw her in my mind. It was her exact feeding time as she always woke me up at four in the morning. Was it conditioning to the time or was it her saying good bye? I will always have a wayward pet to honor her..