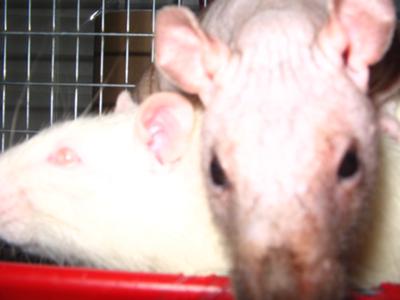 I know it sounds very silly to grieve over a rat. I never thought that I would. Rats have a life expectancy of 2 years so I was prepared for it. But tonight he died as I watched him, he died in my arms, seeking comfort for the last time.

Murphy came to me from a friend who had received him from another friend so I guess you could say that he was third hand. I was looking for a pet for my daughter so I did research and found that rats made good pets because of their gentleness and intelligence. It was a lot of fun to carry him around on our shoulders and feed him treats.

Rats are supposed to have roommates so eventually we bought him a friend (we saved him from being snake food). After his new friend, Sleepy came, Murphy wanted little to do with us any more. Every time I tried to take him out of his cage he would fight me. Yet, when he was on my shoulder and hiding under my hair he would make this clicking noise. I could not figure out if it was out of anxiety or pleasure from the attention.

So eventually I decided to just leave him alone with his friend. It seemed that he did not want my affection, or so I thought.

But I discovered tonight that yes, rats do have feelings. I know it's hard to believe but they do. Tonight the question that I always had in the back of my mind was answered. Every time I tried to put him back in his the box that had become his death bed he clung to me, not wanting me to let him go. I tried to make him as comfortable as possible but he would only relax if I held him against my chest.

Eventually I decided that he would have to stay in the box so I covered his frail body with a satin piece of fabric and pet him for what seemed like hours. Every time I stopped he would start moving around looking for my hand. I thought to myself that it couldn't possibly be true, but there it was. He needed me. I gave him comfort in his last few hours of life.

When eventually he settled down, It seemed that he was not breathing anymore so I laid my finger on his chest and I felt his heartbeat until it suddenly stopped. Feeling the life leave from my friend was one of the most heart wrenching experiences I have ever had.

And yes, he was a rat, but Murphy was a wonderful creature that brought me joy during his life and who loved me right up until the end. Rats are capable of more than we think....