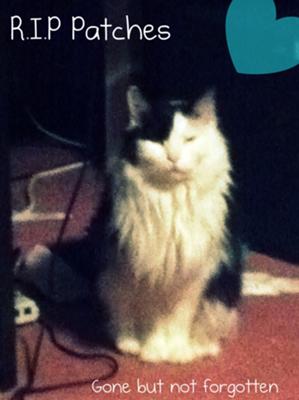 We kept them indoor cats and recently Patches escaped, and we found him underneath the steps leading to my neighbor's house. I was the one who found him and he was completely non-responsive so I freaked out. Then my Dad looked and Patches had moved.

We managed to get him home and safe. A couple days later we kept finding little pieces of poop around the house. My parents are in the process of getting a divorce and my Mom had moved out about 2 days before, so we connected the two and assumed he was mad at us.

Then one day I woke up, and there was blood on my foot and Patches was squatting next to me trying to get something out. I instantly knew something was wrong. My Dad came up to my room and told me we had to bring the cat to the vet, which I was about to tell him, but he apparently had found puddles of blood all around the house. My Dad and I drove to the vet and explained to them what was going on. We left Patches there for 2 days so they could get a blood sample, and they told us they would call us soon.

Later that night, we got a call saying that something was wrong. They didn't know what, but there was a chance he wouldn't come home. Up until this point I wasn't really worried, he had had the same symptoms before and he had just come home with antibiotics.

They told us they would call us back the next day sometime between 10 and 12. It got to be 4 o'clock and the vet hadn't called back. I texted my Dad every five seconds while he was at work, bugging him to call the vet.

My Dad eventually called me back and told me if I wanted to see Patches I should be ready to leave in 10 minutes. As soon as he pulled into the driveway, I ran out with my other cat so she could see him as well.

My Dad was silent for the first 5 minutes of the trip, then he turned to me and said, "Well, there's no easy way to say this. Patches has a tumor in his intestines and its causing a double blockage (meaning he can't pee or poop)". It hit me we were on the way to see him for the very last time.

We got to the vet and I immediately started crying harder than I had been while I was in the car (though I thought it wasn't possible). We were brought into a back room with an examination table covered with a blanket. The assistant came back two minutes later with him. She laid him on the table and it again hit me that this would be the last time I saw him.

My 9 year old sister, Mom, Dad and I sat in the room petting him for about 40 minutes. I asked how they were going to do it, and my Mom told me they would bring him back and would either do it tonight or tomorrow. I wouldn't have that. I couldn't let his last memories be of being locked in a cage and having a complete stranger make him fall asleep and never wake up.

So we waited another 15 minutes for the vet to get there, and my Dad and I stood next to him telling him how much we loved him and then he was gone. I couldn't handle it and I turned and ran out of the room.

I'ts been two hours since this happened.

Patches baby, I love you soooooooooo much. You were always there for me to cry to and tell my secrets I've never told anyone. You will always be my baby boy. I love you more than you'll ever know. Your spot on my bed will always be open for you to curl up in, in case you ever feel like stopping by. You provided happiness in what has probably been the worst year of my life, in addition to the other 12 years we've had you. You were and forever will be a part of my family.

I love you soooo much. You will be in my heart forever.