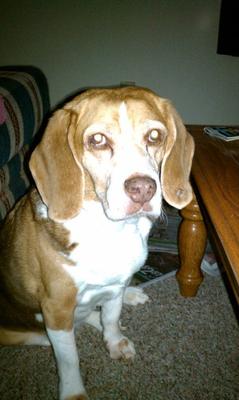 Where do I start? This is all too soon and very real! This morning at approximately 03:30 I had to put to rest my ever faithful companion - Puppy! Puppy is a misnomer for my almost 16 year old Beagle who survived a lot this past year. Such a tough little guy!

I rescued Puppy from my local pound when he was only 4 years old. He was the only dog that was sitting in his cage, not barking, just observing. For a Beagle this is very uncommon but something about him drew me in. It was love at first sight. I quickly learned that Puppy liked things his way and did not like to be restrained/caged in the least (perhaps due to the cage he was resorted to living in at the pound). I initially tried to corral him in my home via a baby gate (just until he was adjusted). Coming home to a hole chewed straight threw the baby gate let me know that he was not having any of that!

Puppy quickly adjusted and was a member of my family in no time. For a Beagle, he was actually pretty chill and laid back. He LOVED kids, attention and running outside. If he got on a scent of something he was gone! He was smart as a whip and figured out how to escape the backyard through nudging the bottom gate and squeezing threw. There were many a time that I was in a panic, searching the neighborhood and I would find him just trotting along - sometimes at various neighbors houses trying to get food - LOL...

He loved to go on long walks but often times he presented as more anxious then he was. I remember several times actually having to pick him up and carry him back home because he refused to walk another step! As the years went on he definitely became my "fur" child. I don't have actual children and Puppy filled that void. I would seriously get separation anxiety as would he - LOL. Anybody that watched him got a good chuckle at my expense due to my numerous phone calls to "check in".

Puppy has moved with me from three different states and been the one constant in my life. Divorce, moves, job changes - he was always by my side. Never had any medical issues until this past year. While being boarded at a kennel while I was on a trip for work he ended up having a serious life-threatening condition requiring emergency surgery. It was as I landed (after having been in the air for 3 hours) that I learned via messages that he had been rushed to the emergency vet and was incubated and in critical condition. I was 2000 miles away. I wasn't sure if he was going to live or die.

He had laryngeal paralysis (undiagnosed until this point). Due to his anxiety (my being gone) and the humidity in the South it exacerbated to the point of needing surgery. I authorized the surgery and was assured he would be fine. Puppy being the trooper he is came through with flying colors and they were ready to release him the next day (as being caged causes him more anxiety) - LOL...

A good friend picked him up and watched him until I could get back. Recovery was slow and I can't lie and say it didn't frustrate me at times (something that I will forever be ashamed of) I was always worried that he would get aspiration pneumonia which is a common occurrence after this type of surgery. I rushed him to the vet several times in a panic to learn that he was fine. I had to adjust to his new "normal" which took a while to get use to. He coughed all the time and this was hard for me to accept. I feel guilty that there wasn't more I could do. I was afraid that he would never be the same.

He would hide under the bed and I knew he was in pain. He would scratch and scratch at his stitch site (which was in an awkward position on his neck that an e-collar wouldn't he help with). I became wise and tooled together a fabric headband and it covered it perfectly, allowing it to heal. Slowly, slowly "MY Puppy" returned to me. It took a good 4 months of hand feeding and nerves of steel but he came back to me. He even barked again - which was something I was told he would probably never do. I know it was his own strength and fight that brought him back to me.

As I sit here and type this I can't help but wonder if there was more I could have done these past few days. This morning he started vomiting and had what appeared to be a small seizure. I was scared and terrified that he was going to die right in front of me and then he was fine. You have that moment of "did that just really happen?" I sat holding him, crying afraid to let go - wondering if I should wait to take him to my Vet (who knows him so well) in a few hours or chance the emergency clinic. I put him in bed with me (which he loves) and sat looking at him - watching for any signs.

In hindsight I should of just rushed him to the clinic but he seemed fine and wanted to sleep. I won't lie and say I wasn't afraid and that I already knew his time may be coming. As I lay next to him for a few minutes he was just not breathing his normal way. I was used to his new norms and his breathing just seemed "off" (not gasping or struggling) just "off". I woke him up and he just didn't seem himself.

I immediately got dressed and jumped off the bed and he appeared ok, but then didn't come with me to the front door and I knew he was not himself. I got him out in the car (which he loves) and as we were driving to the clinic he appeared to be having the time of his life but I could feel it in my gut that this would be our last car ride together. I was too afraid to roll the window down for him to enjoy as the night air was very cool.

It didn't take long for the Vet to let me know that Puppy had probably aspirated after throwing up and that he had fluid on his lungs. I had to wonder if I would have gotten him there sooner if things would be different but the Vet assured me I did the right thing and got him there in time -aspiration can take days sometimes to show up but with puppy's age and size (small) it was a 50/50 chance on trying to treat him. Putting him through treatment with the chance he may not recover and succomb to the AP again. I couldn't do that to him. I already put him through a surgery and watched him struggle to recover from that and I couldn't bare for him to be in pain and perhaps come home from work and he has gotten sick and suffered.

It was the most agonizing decision of my life. My pain or his? I had to choose mine. But I still sit here and question if I would have done things differently, if I were rich and had all the money in the world would that have changed my decision, would I have exhausted all options or do I need to face reality and realize that Puppy was 16 years old (4 years past what beagles normally live) and my guilt is due to not feeling like I had enough time with him. I didn't get that last walk in because I have been stressed with work, I didn't give him his bath he needed, my patience was thin at times?

I know these are the stages of grief and I have to process but it's hard. 24 hours ago my little man was with me and now he is not. My house is empty as is my heart. I am thankful to have spent the last moments of Puppy's life with him up until he took his final breath. I couldn't be with him during his surgery and I felt guilty for that but I wanted him to know how much I loved and cherished him every day of his life! Even when he did "dog" things that we all get upset about (chewing, peeing) LOL - he was my little man and made such a HUGE impact on my life!

Right now, I don't know how I will get through this but I know I will. Puppy, you are gone but not forgotten! As I arrived back to my empty home, I took a moment to sit down and reflect on Puppy and just breath. I picked up a framed picture of him I have and I swear I heard a dog barking quietly (not a neighbor dog) but a bark from Puppy! Maybe it was due to exhaustion because at this point I have been up for 29 hrs, but I can't help but think it was a sign from Puppy assuring me he is ok and at that Rainbow Bridge waiting for me! RIP little guy!