by Bill
(Kingston, On. Canada) 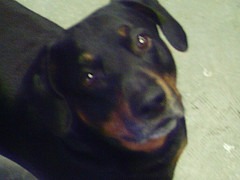 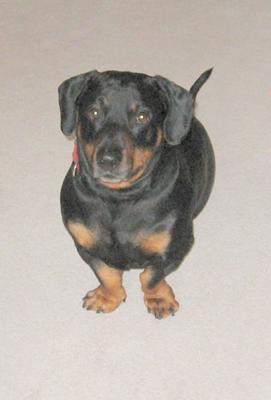 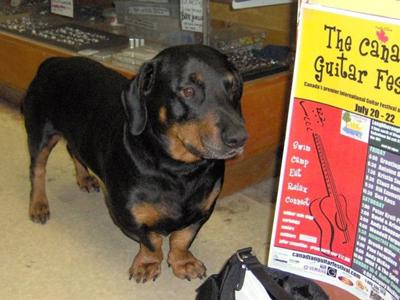 Like everyone here I would say I lost the best dog in the world, but they are all, to us, the best dogs in the world and why we all share the pain of losing them. It was three weeks ago that I lost the most important part of my life, my little buddy Arlo.

For almost 11 years, since I first saw him, a Dachshund Rotweiler mix, at 4 weeks and picked him up at 8, we were together night and day, at home and at work. At 8 weeks he started spending all day at the store, meeting and greeting customers, sometimes even when he was too tired to. Several times he got he got stepped on and often had little kids pull on his tail, but he took it in his stride as simply part of the job.

When he was young he used to lie under the shirts and people could only see his large head poking out.. they always expected a much larger dog to come out to say hello. Everyone loved him and he had his picture taken literally hundreds of times over the years by tourists so people back home could see this unique mix; and Arlo basked in the glory. I think he really believed it was his store and people really just came to see him.

On really really cold days I would leave him home, but he was never happy about it, though he did not mind not going to work when it was pouring rain; getting wet on his terms like swimming or attacking the hose was fine, but not rain or baths! Almost his entire life we spent all day and every day together and he was the closest family to me, and very well loved.

It was starting to get hot in June and he was getting older so slowing down a bit, but on the way home from work on the Friday he lay down for a rest which had never happened before. I didn't think much of it but he did not want his dinner either and the next morning was very lethargic so I called the vet and rushed him in that morning.

Hours of tests and waiting for results to find out he had an incredibly high enzyme count in his liver. I was given antibiotics for 2 weeks and a liver cleaning and strengthening pill, and in the first week he seemed to be getting better. I tried to leave him home to rest but he insisted on coming to work, then I would go home in the afternoon and get the van to drive him home in the hot evening.

It was a fight to get him to take the pills to make him better, two in the morning and two at night, as we battled the liver disease, but then on the Tuesday morning he took them no struggle. We walked to work and he greeted as always but in the afternoon he went to the back room and lay there. I rushed home at 5:30 and got the van and came back and brought him home but he was weak and sad. I tried to get him to eat but there was no interest and he slipped away that evening with me beside him.

It has been very difficult and people still are coming in to the store and asking for him, so every day I relive his passing, but it shows how much he was loved by everyone I believe. At first I said I would never get another dog, but I know I have too much caring and love to give our furry friends not to get another when the time is right. But I know I will never have another Arlo and while you are buried in your favourite spot in the back yard and you are always right there with me in my heart and mind. The unhappiness at the end is slowly disappearing as I recall and reflect on all our wonderful and happy times together.