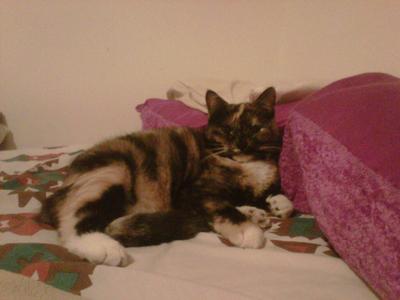 Please read the story in its entirety before jumping to any conclusions about her outdoor access.

I lost my cat Fern three days ago to a car. I had her for just about three years. She was my entire world. I always knew I was an animal lover, but the love that we had transcended species, and we developed our own language that only the two of us could understand. And we spoke it often! I would talk to her so much that people in the house thought I had company up in my room.

She was there every night at bed time, and rubbing all over me to wake me up every morning. She was also there to “approve or disapprove” of some of the guy friends I had over! Shadowing behind me through every room I entered and exited. She even had to be in the bathroom when I was showering (or right outside the door) or else she would “scream” to get into the bathroom. She had a little raspy voice that made the sweetest sounds. She was there by my side at all times. Looking back she’s sitting in so many pictures where I didn’t notice her before. She was literally always there, somehow some way.

That is, when she wasn’t outside exploring. And it would always slightly panic me, thinking about her being outside, but she proved herself out there over the years to the point where I finally did gradually back off with my supervision, still frequently checking on her. And honestly, ever since she was a kitten, she was always gunning for the door. She knew that that was where the world really was. Outside of the nest.

About 5 months ago, I moved to a new property where the street was a lot busier than last year. I was hastily looking for apartments and found this room to rent and intended that I would keep her inside due to the traffic conditions on the road in front of our house.

But, low and behold, if she wanted a way out, SHE FOUND A WAY OUT. She would dart out that front door so fast that you couldn’t even see it let alone stop it. And trust me, I would try and keep her in, especially at night. But this girl was a wild one. With an angel’s face. She was one of those cats that you thought was invincible… you think they’re just too amazing to go. Too loved to go. Too special. But I realize now that when I let her outside, over the years, virtually unattended, that I was letting her belong to the whole world. And all of its dangers.

I am looking to hear from people that understand that me letting her outside was not a matter of neglect, but a matter of respect for her desires and needs that I just personally don’t have and don’t understand. I knew deep down that there was no artificial world I could build for her that would provide for her the same thrills as seeing the world, wild and free. She would look up at me with these wild eyes, her back haunches shaking, and she had something out there to go get. And aside from her owner, I was her friend, and I wasn’t about to keep her from at least TRYING to go get it.

She was my Fernicia. My Fern Burn. My super special. My Tumble-ina. My Ferguson. My baby girl. All I need is some help and reassurance that I did the right thing, letting her explore the world that SHE desired.