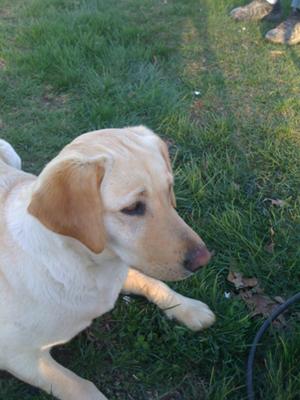 This was his best doggie friend.

I had a great dog named Thor. The cutest things about him were that when he laid down, he crossed his front paws. Another thing is that when he jumped up on you, he wrapped his arms around you like he was hugging you. He was a great dog. He protected us from the dogs next door and the animals out in our four wheeler trails. One time, he killed a deer right in front of my eyes. The next day, the deer was gone. We think that a bear might have gotten it in the middle of the night.

When I started up the driveway, I shouted mom! I yelled to her like 17 times and I finally made it to the front door. I told her that Thor was lying in the middle of the road dead. We went and put him in the grass, went back to the house to get a trash bag to lay him on, and put it in the back of my mom's car. We took him to a friend's house and put him on the cold ground, so he wouldn't decay as fast. Our friends buried him in the woods behind their cabin! I wanted to watch but it was just too painful so me and my mom went home.

From this day on, I will never forget how much I loved him and what a great dog he was. I love you Thor!