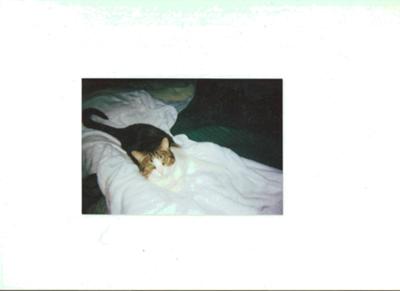 Jewel was one of three cats that I grew up with. When I was eight years old, my family had found her one spring day hiding in the storage area of our garage. After days of trying to get her out we decided to take a piece of string and fling it near her to get her attention. My mother pulled it back slowly and Jewel playfully chase it until she came into my mother's reach. She had a gash on her neck so my mom took her to the vet. She was less than two months old then and recovered quickly. I had named her after my favorite '101 Dalmatians' puppy.

During that time, Jewel was the most timid being I'd had ever known but we still developed a very strong bond. Once she made us her family, she became a very friendly and social kitty.When a stranger came over she hid in me and my little sister's bedroom.

I had always seen our cats as my sisters, but she had found a special place in my heart. Jewel was an extremely warm, sensitive, affectionate, talkative, and understanding kitty. She needed to be with us all the time when we were home. She always slept with me at night, either on my pillow above my head or curled next to my stomach under the covers. Whenever me or my sister was upset, scared, or sad, she was always there meowing and rubbing against us, trying to ease our pain. Everyday we would play with her and tease her with string.

A couple years after my parents divorced she started showing signs that she would soon be leaving us. One day after school our my mom called and told me she was picking me up, and I immediately searched for Jewel. I soon found her lying under the desk in the living room. She got up when I spoke to her and staggered into the kitchen. I went into the kitchen and as soon as I crouched next her I realized one eye was normal but the other was a narrowed slit and I knew she was going to pass soon.

After fifteen minutes of telling her how much I loved her and that she was a great cat I reluctantly left. My father, who had kept Jewel, told me he called the vet and that he was putting her down the next day if she didn't pass during the night. She passed away during the night of Nov 17 2008. Out of all three, her passing was the only one where I hardly had time to say goodbye. I was so devastated that I didn't go to school for two days. For the next couple of weeks I kept wishing that it was only a dream but the house was always empty when I got home.

One night though I had this amazingly realistic and soothing dream where I was eight again. Throughout the dream I was playing with Jewel and Molly, who was our eldest cat that had passed away when I was eleven. When I awoke I knew they had come into my dream to reassure me that Jewel was safe and happy. Even though my heart aches with missing her the other two, I know that my little sister Jewel will be there when I go to where she is one day. No matter what she was her namesake and I'll always remember her.